A viewing tower is taking shape on a wine hill in northern Croatia. It will promote Međimurje’s answer to Furmint…

A new tourist attraction arises over the vineyards in Croatia’s Međimurje region. Photos by Chris Boiling

The most beautiful spot for sipping wine in Croatia’s Međimurje region – where the father of biodynamic agriculture and founder of anthroposophy, Rudolf Steiner, was born – is getting a viewing tower.
Work on the 25m-high wooden tower, on Mađerkin breg (Mađerka’s Hill), is well under way. It is due to open in July and represents an investment of about €1.3m, with the finance coming from the European Regional Development Fund.
The hill already offers amazing views. On a clear day you can see four countries (Austria, Slovenia, Hungary, and Slovakia) from this viewpoint in northwest Croatia. On my visit, I could only see the terraced vineyards that stretch into Slovenia’s Jeruzalem-Ormož wine region.


The tower will enhance the two wine businesses that already operate on the 341m-high hill. Štampar and Cmrečnjak, which bought the hill in 2014, have occasional wine bars there overlooking their family vineyards.
David Štampar told Canopy he hopes the new tower “will attract more tourists to the destination and that we will be able to realise its full potential as a tourist attraction, but also a space for education and presentations”.
The tower certainly looks as if it will attract more cyclists to the Municipality of Štrigova. It is part of the CSA-CycleSeeing Attractour project, which is co-financed by the Interreg V-A Hungary-Croatia 2014-2020 programme to aid “sustainable growth” in the Hungarian-Croatian border region. 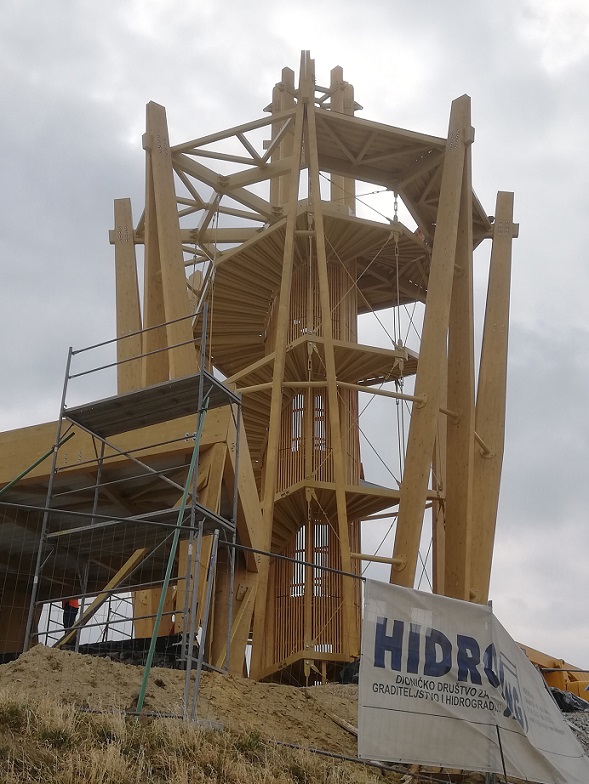 Next to the base of the tower will be a Bike Information Centre (BIC) equipped with an interactive touchscreen for information on routes and destinations, an e-bike charging station, a bike repair station, bike racks, and benches where cyclists can rest. There will also be a multi-functional space, which can be used for presentations, exhibitions or training sessions.
The hill is part of the ‘Pušipel cycling route’ – Pušipel being the local name for Furmint, the region’s signature grape variety.

Croatia’s smallest and northernmost county, Međimurje, is an old wine region situated between the rivers Mura and Drava, with vines planted here from the Roman era. The region is divided into the hilly Gornje part to the west, where the best vineyards lie, and the flatter Donje area to the east – divided by a railway track (the reason Rudolf Steiner’s father, Johann, then an employee of the Southern Austrian Railway, was stationed in this part of the Austro-Hungarian Empire).


The villages of Štrigova and Sveti Urban are the centres for winemaking, with boutique family wineries replacing the large co-operatives of the Yugoslavia era. As it’s a cool-climate region, the grape varieties include Sauvignon Blanc, Graševina, Riesling, Muscat, Gewürztraminer, Chardonnay, and Pinot Noir. But the star – with its own bottle design (above) – is Pušipel.
As in neighbouring Slovenia and Hungary, Pušipel/Šipon/Furmint is a versatile variety, producing sparkling, sweet and still dry wines. But the focus is on ‘classic’ and ‘prestige’ versions. The classic Pušipel is a light, crisp, easy-drinking white wine with high acidity (7-7.9g/L in the 2021 wines I tasted recently). Made in temperature-controlled stainless-steel tanks, the acidity is often balanced with 2-3g/L of residual sugar. Alcohol is about 12%. The major differences between the leading producers (such as Dvanajščak-Kozol, Štampar, Cmrečnjak, Jakopić, Vina Kunčić, and Lovrec) were the use of native yeasts or not, the addition of nutrients for the native yeasts, and the percentage of MLF.
The prestige wines are a little more complex, with grapes harvested later and wines matured longer on lees in large oak and sometimes acacia barrels.
Clonal selection and soil classification are current projects designed to improve the quality of the wines in the future.
Also in the future, fourth-generation winemaker David Štampar – who produces Pušipel in still, sparkling, and ice wine styles – would like to see wind organs “built into the lookout itself to make it even more attractive”.

Furmint: The most versatile grape?

Getting creative with Pinot Grigio