How to make a rosato

The paler-than-ever Chiaretto di Bardolino is trying to get recognition outside Italy. Five leading producers explain their methods…

This year, Bardolino Chiaretto changed its name to Chiaretto di Bardolino – underlining its pale (chiaro) colour and its origins in the town of Bardolino.
The addition of the word ‘di’ is a small change but it signals the Consorzio del Bardolino e del Chiaretto’s intention to make Italy’s most popular rosato more widely known outside its home turf.
The name-change follows a few other significant changes in the region, east of Lake Garda.
The consortium has identified three shades of light pink that represent the minimum, middle and maximum of the new paler style, yields per hectare have been reduced from 13 tons to 12 tons, and the guidelines have tightened the spec of the blends. The maximum percentage of Corvina allowed has been increased from 80% to 95%. The minimum amount of Rondinella is now 5% (reduced from 15%), and the maximum is 40%. Other grape varieties allowed to be cultivated in the area can be used for a maximum of 20%, with a 10% limit for each variety.
The aim is to improve the wine’s identity overseas. This is a move forced on the producers by Covid-19 which hit tourism – and rosato sales – in Lake Garda. Before the pandemic, the region was reaching for annual sales of 12m bottles.
Now, it is hoping to maintain yearly sales around 10m bottles.
Despite the worldwide clamour for rosé, Italy’s most popular rosato has struggled to get noticed in the light and dark red shadows cast by its illustrious neighbours, Bardolino and Valpolicella.
A typical Chiaretto is 80/20 Corvina/Rondinella, very pale in colour from just a few hours of maceration, with distinctive citrus aromas. But how does the winemaking compare to other rosé styles? Canopy asked five leading producers for the key points.

Gorgo’s Chiaretto is a blend of Corvina (60%), Rondinella (30%) and Molinara (10%).
It’s a fresh, fun and fruity rosé. The aromas and flavours are reminiscent of summer fruits: red cherries, strawberries and raspberries combined with a fresh floral note and crisp acidity.
The bright pink peach blossom colour comes from a brief maceration with the skins for “a couple of hours, at 10°C, under nitrogen”, according to owner Roberta Bricolo (below).


The must ferments at 17°C for 15 days. “We use only 30mg/L SO2, two rackings, then the wine remains on the fine lees in stainless-steel tanks for three months at 12°C, with weekly bâtonnage,” Roberta says.


Le Fraghe’s Rodòn Chiaretto is a saignée of owner Matilde Poggi’s red Bardolino.
“Coming from northern Italy, I find myself more familiar with the pale pink colour which gives me an expectation of a delicate, low tannins, bright acidity and light wine,” she tells me. “From darker pink colours I expect much more alcohol, tannins and concentration, which is not my style. I prefer making Chiaretto saignée from Corvina and Bardolino. We cool down the grapes to 6°C, we crush them and let them rest in a stainless-steel tank for about 6 hours. We drain 30% of the juice, add a pied de cuve and let it ferment without the skins at 16-18°C.
“After fermentation, we rack two times and let it rest part in concrete and part in 50hl stainless-steel tanks at 12°C in order to avoid the malolactic fermentation. In 2020 some malolactic was done. First bottling for vintage 2020 was in February. Last bottling was in June. Total SO2 level for Chiaretto 2020 is 70mg/L.”

Guerrieri Rizzardi’s Keya (above) gets its name from the first two syllables of Chi-a-ret-to. “The name also signifies a little of what the wine represents, as we have long thought that the real strength of the Bardolino vineyard area is in its ability to make world-class rosé wines and that rosé/rosato is the KEY to the region’s present and future success in wine,” owner/winemaker Giuseppe Rizzardi (below) says.
Another key for him is that this is a designated rosé, “not an offshoot or by-product of red winemaking”. The grapes are picked earlier than if they were making a red, in order to preserve freshness and vitality. After a short, gentle pressing – “just enough to allow the ideal amount of colour and depth of flavour” – the wine is vinified at cool temperatures in stainless steel, much like a white wine, with the goal again to preserve freshness and fruit purity. 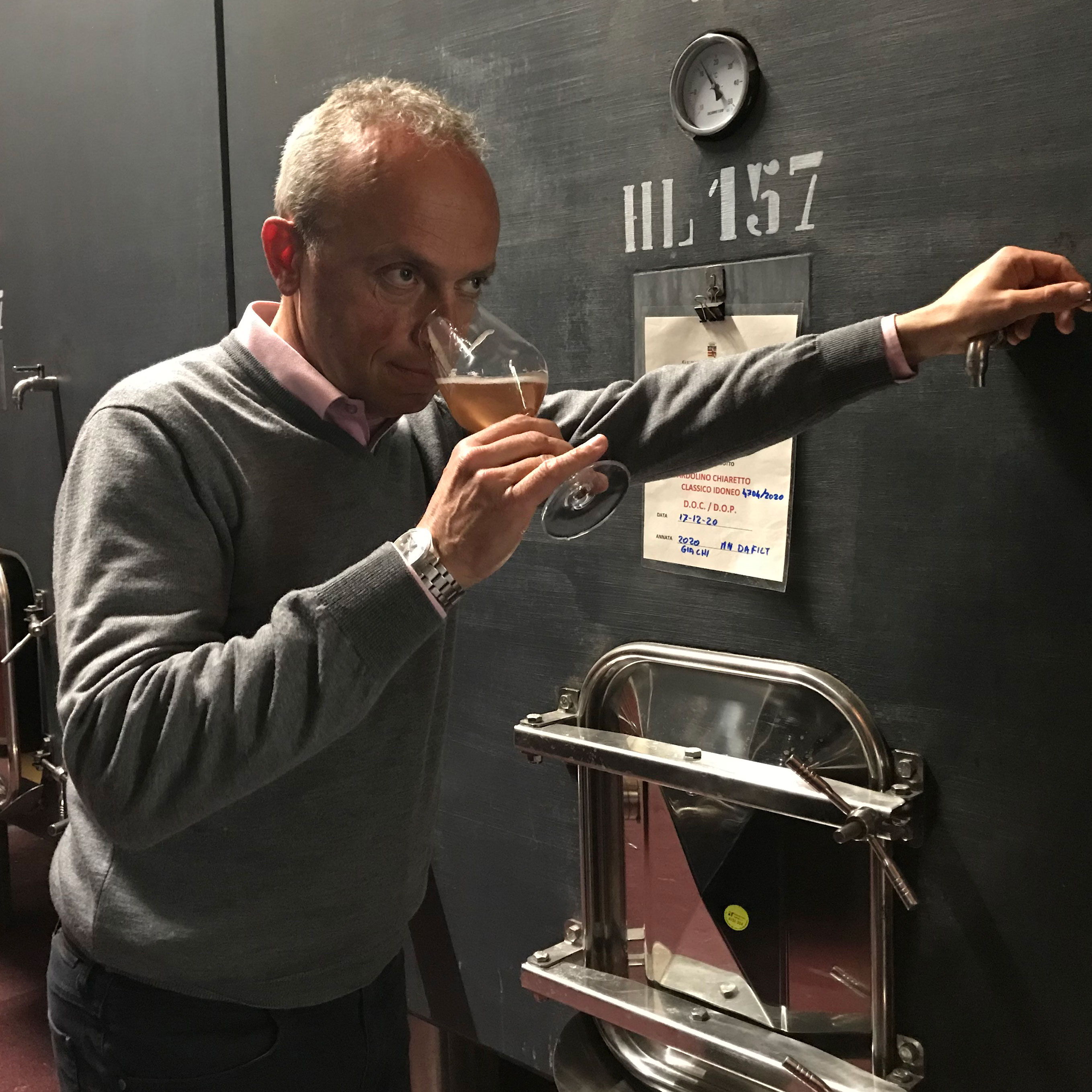 “Our winemaking style involves direct pressing of the grapes, after destemming/crushing,” Giuseppe continues. “In this way we have the following effect: Minimum contact time on the skins. Thanks to very fast timing, the use of antioxidants and low temperatures we are able to reduce oxidation to a minimum and avoid a loss of colour. In addition to this, our technique involves separating the wine from the pressing, to have a pale pink colour and avoid extracting too much, but it is a decision that is evaluated based on the vintage. At each stage of processing we try to process the must in the absence of oxygen, or in any case in reduction and minimise the number of possible decantings. The temperature is also fundamental and is always managed during all phases, from receiving the grapes to storage. With low temperatures we can prevent or slow down oxidation.”


Le Vigne di San Pietro is an “island of land” on the Morainic Hills of Lake Garda. Carlo Nerozzi (above), whose parents founded the 10ha estate in 1980, produces a light, fruity rosé with good character and a hint of strawberry and peach flavours.
A blend of Corvina, Rondinella and Merlot, the grapes for Corderosa are hand-picked, destemmed and macerated at 5°C for 4-6 hours in the horizontal press.
“I like to get the natural colour I get from the maceration process; nothing is added,” he tells me.

16ha of vineyards around the village of Calmasino produce the Corvina and Rondinella grapes for Vigneti Villabella’s light-pink wine.
First produced in 1987, the colour is much paler now. “Traditionally, Chiaretto was obtained by cold maceration of the must on the skins for a single night. Today, a part of the must makes just a few hours’ maceration, to obtain a very light colour,” says winemaker Edoardo Lessio (below).
“The final colour is already influenced by the choice of vineyard and harvest time. Pre-fermentation maceration lasts for a few hours (maximum eight) till we reach the required colour. The destemmed grapes are cooled to a temperature of 15-16°C before being pressed.”


Request for a pink emoji


Chiaretto di Bardolino has created a petition on Change.org to support the introduction of a pink wine emoji for those consumers who want to share a glass of rosé with friends and family.
The Consorzio di Tutela del Chiaretto e del Bardolino has submitted to Unicode Consortium, the Californian organisation that supervises the rules of computer writing, the request to include the emoticon dedicated to pink wine among those available on devices all over the world.

How to influence the cherry aroma in wine

Rosés with complexity and texture

The rosé with a citrus twist

The taming of a tricky grape