The roof of Giusti Wines’ new €20m winery says so much about the company and the man behind it, Ermenegildo Giusti.
The undulating shape reflects the location, between the hills of Asolo and Montello in northeast Italy, and Ermenegildo’s philosophy of “being in harmony with nature”.
It also represents the ups and downs in Ermenegildo’s life since he left Treviso as a teenager and went to Vancouver with his younger brother, believing Canada was part of the United States. He returned in 2000 as a very wealthy man, after building up the Giusti construction company in Alberta, and started investing in vineyards. He launched himself into becoming a substantial force in Prosecco DOC with 2ha of old vines at the Dal Col vineyard in Treviso, and also purchased Tenuta Case Bianche, which has been in the Giusti family since 1870 and contributes Chardonnay and Glera to a growing portfolio of wines.
The roof, which emerges from vineyards producing DOCG Asolo Prosecco Superiore and DOC Montello e Colli Asolani wines, also shows Ermenegildo’s commitment to sustainability.


The roof is covered with disease-resistant vines. There are three reasons for this, he says: the leaves of the Merlot Khorus turn a beautiful brown/purple in autumn; they can’t put a tractor on the roof and, even if they could, Ermenegildo is against spraying. He says: “We have to eliminate the poison we put on the ground… We are killing ourselves.”
Giusti Wines, which is SQNPI (National Quality System for Integrated Production) certified, has been growing three disease-resistant vines since Italy registered ten new varieties in April 2015 – five white and five red varieties created by researchers from the University of Udine and the Institute for Applied Genomics in Udine. As well as Merlot Khorus, Giusti has also planted Cabernet Volos and Sauvignon Nepis.
The decorative vines on the roof top a beautiful tasting room and five-floor winery, which goes 8 metres underground.


Ermenegildo wanted a winery that made a statement and showed what he had learned during his years away. Designed by architect Armando Guizzo, the 4,000sq m winery uses recovered rainwater to produce renewable energy and has a small underground ‘piazza’, covered by the surrounding vineyards and decorated with local flora and an indoor waterfall. “We didn’t worry about the cost,” Ermenegildo says. “We just wanted to do something that is an architectural ornament and something that represents who I am. I don’t copy anybody; I just did what was inside my heart.”
With ten estates covering a total of 100ha (70 of which are under vine) and the new winery, opened last summer, he has invested about €70m realising his dream. But, he says, “it’s not about money; it’s about what is inside you. It’s the passion I have for the land and the love for nature and for people. I want them to have the best glass of wine in the world or that my territory can give without chemicals, and to know that it comes from one property, one vineyard that I own.”

He adds: “I always had a huge passion for wine. I guess when you grow up in a farm, the attachment and love for the land and passion always stays with you.
“My dream is to promote the Montello area, an area Napoleon recognised as being a great area for red wine, and I’ve doubled-down – I want to take it up, I want this northern part of Italy, Treviso, to be recognised in the world as one of the best wine areas.
“I always dream big.”


To go with one the most beautiful production plants in Europe, he has hired one of Italy’s top consultant winemakers, Graziana Grassini, to oversee the production of his wines, which include both DOC and DOCG Prosecco, as well as Pinot Grigio from Longheri and a Venetian Chardonnay. The red range includes varietal wines such as Merlot, Valpolicella blends of Ripasso and Amarone, and a red made from indigenous Recantina grapes (Augusto DOC Montello). Recantina also features in the Bordeaux-style blend Antonio and the Giusti Rosé Spumante Brut, along with Pinot Nero and Chardonnay.
The flagship red, Umberto I (named after Giusti’s grandfather), is a Super Venetian Cabernet/Merlot blend aged in barrels for 24 to 36 months.

‘I’m a leader, I’m not afraid to go first on anything’

Although Graziana has not made Prosecco or any wine from the region before, Ermenegildo sees this as an advantage. She is “not contaminated” by local traditions, he reasons. “Everyone in Prosecco is making the same now. I want to make something that represents my property and hills. I said to Graziana you are free to make it whatever way you want, as long as it represents our territory and without copying anybody. I’m a leader, I’m not afraid to go first on anything. I want to use what our land can give us. Maybe the flavour will be different but it will be pure, it will be with very little pesticides or no chemicals at all and they will be authentic wines of the Montello. That’s my dream.”
He also says he chose Graziana for her combination of “feminine grace, Tuscan determination and international sensitivity”.
“I’m excited to see what Graziana can do to the area,” he adds.
Graziana’s first wine, a Prosecco, will be released later this year.
Graziana, who also consults for Tenuta San Guido in Tuscany, Alberto Longo in Apulia, and Villa le Prata in Montalcino, stresses she doesn’t want the wines to carry her signature but to express the land and the philosophy of the winery.
Speaking through an interpreter, she said she is impressed with the potential of indigenous red variety Recantina, having tasted the grapes in the vineyards. It has an amazing ruby colour with purplish highlights, aromas of red fruits, ripe blueberries and blackcurrants, with hints of violets and spices. On the palate it is full-bodied, tangy, fruity and tannic.
Graziana thinks it can make complex wines with longevity, but they are currently in the experimental phase regarding the use of oak.
Ermenegildo expands: “There is nothing to say how it should be done, so the last four or five vintages have been a kind of trial. The last couple of years is very close to how we want it – very high purity, very little oak. I think we are nearly there. It’s a very exciting wine, it’s something we can offer the world because we are the only area which has it.”
Giusti has 4.5ha of Recantina planted eight or nine years ago – more than anyone else in the world.
In the majestic cellar of the new winery, the winemakers are experimenting with barrels made from oak, mulberry, chestnut and cherry wood – the trees that grow in the hills northwest of Treviso.
In the meantime, Giusti’s rarest wine continues to age for 12 months in large barrels made of Slavonian oak.
The 2,500L barrels are neutral and help to temper the wine’s acidity and rusticity, but the main reason for their use is tradition.
“There was no way for the local farmers to get French oak or use the oak grown on the Montello hill,” Ermenegildo explains.

Ermenegildo is hoping that such practices will make his estates serene, peaceful and beautiful places to visit – and will help put Montello and the commune of Nervesa della Battaglia on the wine tourism map.
He has built boutique guesthouses at some of his estates and added attractions such as the restored Abbey of Sant’Eustacio (below), which was destroyed in the First World War, and the hermitage of San Girolamo.
“We want the world to come and visit us because I think that’s the way the future is,” he declares. 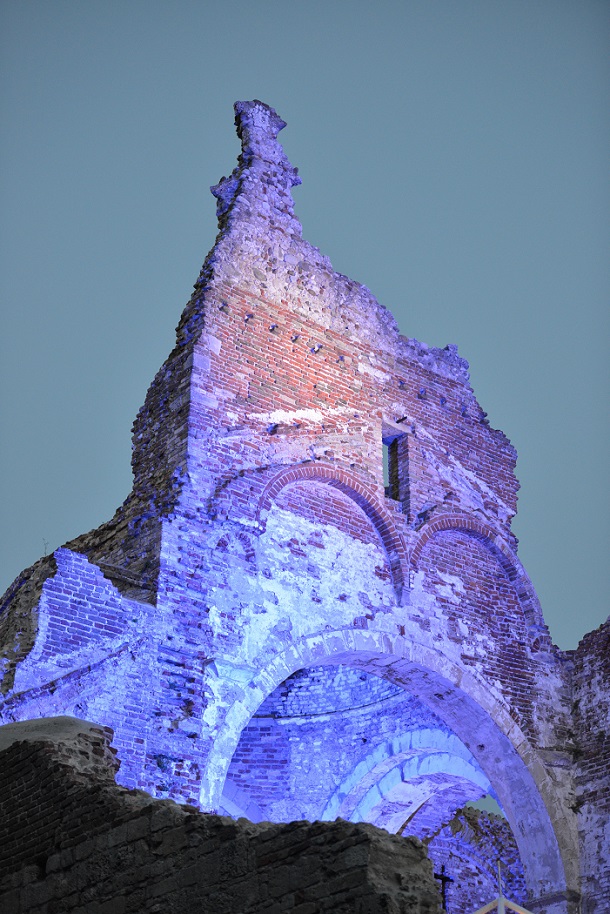