Busy Valpolicella producer Tommasi talks about creating a premium white wine, a new rosé made predominantly from the local white grape, a new winery near Lake Garda and a new range of wines from Orvieto…

“We have decided to aim high and to give a sign: the Tommasi family is here to stay.”
Giancarlo Tommasi, oenologist for Italy’s Tommasi Family Estates, is speaking as the family’s nine-strong fourth generation unveils some exciting projects leading to next year’s 120th anniversary of the founding of the business by their great-grandfather, visionary farmer Giacomo Battista Tommasi.
The Valpolicella-based producer now owns seven wine estates in six regions, including Tuscany and Lombardy, but the two projects uppermost in Giancarlo’s mind are in Lugano DOC, near Lake Garda, and Orvieto, in Umbria.
The family, best-known for its Amarone, wants to add a prestigious white wine to its portfolio and, next month, launches its Le Fornaci Lugana DOC Riserva 2018, made from the Turbiana grape variety (using the local name to distinguish it from other Verdicchio biotypes such as Trebbiano di Soave).
“Le Fornaci Lugana Riserva 2018 will represent the pinnacle expression of Lake Garda, and our idea of a perfect union between vine and territory,” Giancarlo states. “Coming from a heritage of age-worthy reds, we see the noble Lugana Le Fornaci, from the shores of Lake Garda, as our alter-ego premium white wine.”


Tommasi owns 45ha in Lugana DOC. The Fornaci estate comprises three main vineyards near Sirmione: one larger plot of land by the lake, and two further inland. All are planted solely with Turbiana, using the guyot training system and a high vine density (approximately 5,000 vines per hectare).
Currently the wine is made in the group’s historic headquarters in Pedemonte but, from next year, it will be produced in the winery under construction at Le Fornaci, where neat rows of vines descend to the shores of Italy’s largest lake.
The new winery will focus on the production of Lugana DOC wines and a new rosé, as well as offering hospitality and wine tourism.
“We’re seeing Lugano (sales) growing extremely well,” says Giancarlo’s cousin, Tommasi’s executive director Pierangelo Tommasi (below). 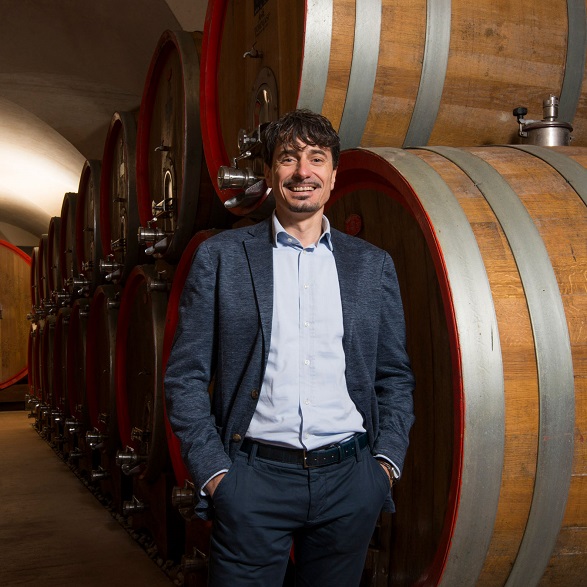 The new riserva – with 25% aged in 500L French oak barrels – and the new rosé broaden the Lugana line which, until a few months ago, consisted of just the traditional Lugana DOC dry white wine, Lugana Le Fornaci. Giancarlo describes this as “a heritage wine that encapsulates the unique qualities of a territory that our family has been committed to promoting for generations”.
Figures released by the company show how this wine has grown:

Lugana Le Fornaci is a blend from the separate vinifications of two vineyards with very different soil compositions. The inland parcel, on a calcareous soil, variously stratified and clayey, adds body and structure to the blend. The parcel nearer the lake is more sandy and rich in silt – and the Turbiana from there contributes aroma and elegance.
The winemaking involves manual selection of fully ripe grapes, fermentation in stainless-steel tanks at 14-18°C, and three months on fine lees before further ageing in stainless steel.

Giancarlo has also used the white grape Turbiana to produce a premium rosé for the on-trade market. Launched earlier this year, the 17,000 bottles sold out within months.
Giancarlo describes Le Fornaci Rosé 2020 as “an exclusive, intriguing wine with a floral bouquet and a vibrant sip”.
Le Fornaci Rosé gets its pale pink hue from the addition of 10% Rondinella, from the group’s vineyard in Peschiera del Garda – giving the marketing team the chance to call the wine “a symbolic union of terroirs from two sides of the lake”.
The Turbiana and Rondinella are harvested at the same time but kept separate during the pressing and maceration. They are both macerated for an hour and pressed for two hours, with the free-run juice from both varieties blended before being chilled, settled, racked, and then inoculated with selected yeasts. The fermentation is at 15-18°C for 10 days; the wine then matures for four months in stainless steel.

The Venetian family (above) is also building up the Umbrian estate it acquired in 2019.
The wines from 50ha of vineyards in Poggente, in the Orvieto hills, will make their debut in 2023: an Orvieto Classico DOC, a Rosso Umbria IGT, and “a secret wine” that Giancarlo “is working on”. The estate grows the white grapes Grechetto and Procanico (an aromatically-rich clone of Trebbiano) here, as well as reds such as Merlot and Cabernet Sauvignon. Along with the vineyards, there are also 15ha of olive trees, with more than 9,000 plants, and 80ha of woodland.
Since acquiring the property, they have replanted a large portion of the vineyards, partially renovated the cellar and modernised the winery.
“Umbria is one of the most evocative and fascinating regions of Italy, appreciated for its historical, cultural and artistic richness as well as for its enchanting landscapes where vines and olive trees dominate unchallenged. The estate, in the locality of Poggente, is not far from Poggio al Tufo, our property in Pitigliano,” Giancarlo says. “And passing through Orvieto, to reach the estate in the Tuscan Maremma, we were thrilled by the hills of this region – so green and full of possibilities. The project in Orvieto is still a work in progress and the official launch is still a couple of years away. In the meanwhile, we are working hard to set up the cellar and to make the wines for the project.”

This new project gives the cousins a total of 649ha, putting them among the most dynamic Italian family wineries and among the most significant ones for vineyard extension on a national scale, with estates in Montalcino (Casisano), Maremma Toscana (Poggio al Tufo), Basilicata (Paternoster), Puglia (Masseria Surani) and Oltrepò Pavese (Tenuta Caseo).
The group began with 5ha. Pierangelo, great-grandson of the founder, explains the desire to acquire land: “We are farmers by nature.”
They make about 3.4m bottles of wine a year and export 86% to 50 countries.
The group’s stated aim is to create great wines, showcasing the regions’ terroirs, and to promote each territory, “linking it to a path of sustainability and hospitality”. The hospitality side includes Villa Quaranta in Valpolicella, Albergo Mazzanti and Caffè Dante Bistrot in Verona and Agriturismo Poggio al Tufo in Pitigliano, Tuscan Maremma.

How to make a rosato