Roero, one of the few DOCG appellations in Italy featuring both a white and a red wine, combines an intriguing mix of traditional and modern winemaking methods. The whites are made in a very modern way, while the reds utilise traditional techniques...

A gentle pressing for Arneis

“Every hill has its own personality.”
Winemaker Fabrizio Battaglino is talking about the Roero wine region in northwest Italy.
Located on the left bank of the Tanaro river, between the Carmagnola plain and the low hills of the Asti area, this part of Piedmont was once part of the bed of the Po Gulf. It was the emersion from the sea, between 2 and 3 million years ago, that led to the formation of these hills. A push that also led to the overlapping of various types of soil: continental sandy-gravelly, sandy-marine and clayey-marine – the marine origin making them rather poor in organic matter but rich in mineral salts.
It’s a landscape that has also been transformed and shaped by the presence of vines, so much so that in 2014 it was included in the list of UNESCO Heritage Cultural Landscapes.
Today, Roero has 1,180ha of vineyards and produces two very distinct DOCG wines. A predominantly white wine region, it has 907ha planted with Arneis and 273ha with Nebbiolo. Annual production is between 7 and 8 million bottles.
Although 5% of other Piedmont grape varieties could be used in the Roero DOCG wines, the top wines tend to be 100% Arneis or 100% Nebbiolo.
Fabrizio explains why they don’t need to add other varieties for complexity: “We have so many soils and hills different from their neighbours.”
I tasted six wines with six different producers – three reds made from Nebbiolo and three whites from Arneis – to learn more about the winemaking in this often-overlooked region. What stood out for me was how the whites utilise modern winemaking techniques while the reds are crafted in a very traditional way.

Arneis (above), once planted to protect the prized Nebbiolo grapes from hungry birds and insects, almost disappeared in the 1960s. But, over the past decade, it has become one of Italy’s treasured white wines – appreciated both as an aperitif and for its ageing potential.
The change is largely due to the use of modern technology, especially steel tanks, inert gas and cool fermentations. 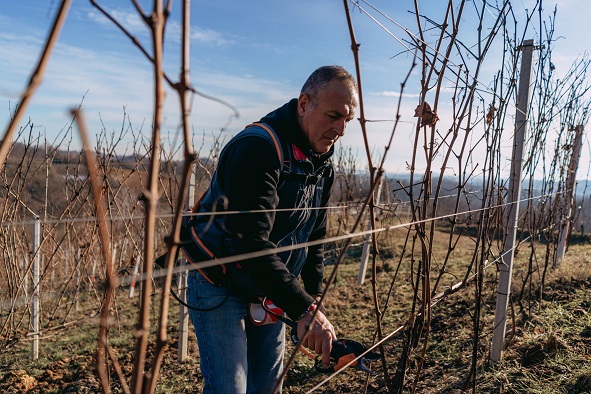 Like many winemakers in the region, Daniele Pelassa (above) uses simple winemaking methods for his Arneis from his star vineyard in San Vito di Montà Alba:

The main deviation from the norm with the Pelassa San Vito Roero Arneis is the addition of whole bunches to the press.
Daniele is also experimenting with amphora for the fermentation to see if it will “help to boost the complexity and the integrity of the grapes. Up to now we have seen that the Arneis gives the best expression with as less as possible contact with air”.


One of the changes in the region is the 2017 introduction of ‘cru’ status for 135 single vineyards, called MGAs (Menzioni Geografiche Aggiuntive), which can be identified on the wines’ labels. Here’s the complete map of MGAs.
Bastia Hill (above), in the centre of the region, is one of these crus. Fabrizio Battaglino’s Roero Arneis Bastia is made with vines planted in 1978. “Old plants that give more structure,” Fabrizio states.

'The only one who can make mistakes is me'

The winemaking here in Vezza d’Alba is also very simple because, Fabrizio believes, it’s “the best way to make good things. I always say, to make a good wine the most important work is done by the vineyard, the soil, the weather. The only one who can make mistakes is me.”
The focus for Fabrizio is preserving the freshness and aromas from grapes growing in a high-altitude (350m), southeast-facing vineyard. The key to his, he says, is getting the grapes straight to the winery for a gentle pressing. Fermentation is at 16°C in a temperature-controlled stainless-steel tank. After fermentation, the wine remains on lees until it is bottled at the end of February. Fabrizio says: “First year (it’s) more fruity; second, third year more minerality.”


Porello Vini, in Canale, in the heart of Roero, has been in the hands of third-generation Marco Porello (above) since 1994. Marco, who gained experience in Bordeaux and Tuscany before returning to the family estate, has a couple of twists for the grapes from his single-vineyard Camestri – the company’s first Arneis vineyard, in the Crocetta MGA, planted about 50 years ago by Marco’s grandfather.
Marco uses native yeasts, so fermentation in the 5,000-10,000L tanks is at a slightly warmer temperature (18-20°C) and lasts for about 20 days. He macerates about 20% of the grapes at 12°C for approximately 24 hours and ferments them separately, adding them back after two months for lees ageing until bottling.
The DOCG whites must be aged for at least four months; 16 months in the case of ‘riserva’ wines.

Compared to its high-quality neighbours on the other side of the Tanaro River (Barolo and Barbaresco), the reds from the Roero appellation seem fresher, less tannic, more elegant, with a more distinct cherry flavour, and are definitely more affordable.
The Roero DOCG reds I tasted were made in a very conventional way: temperature-controlled fermentations in stainless-steel tanks at 28-30°C; MLF and ageing in oak barrels (32 months for ‘riserva’, 20 months for non-reserve reds).


Monchiero Carbone’s most important wine is its Roero Riserva Printi, named after a single vineyard in the Srü MGA. On the summit of Frailin hill are 4ha of Nebbiolo, while the lower part (1.5ha) hosts Arneis and Favorita.
The Monchiero family (above) has been making Printi since 1997. The fermentation is always long and slow; maceration lasts for about 25 days for maximum extraction; MLF and ageing are in Burgundy barrels (30% new); and the wine stays in wood for 22-24 months. After bottling, the wine is stored in the cellar for about a year before being released on the market.


For Giovanni Almondo’s Roero Bric Valdiana 2016, the grapes come from a 1ha parcel in the middle of the Bric Valdiana cru, where the vines were planted by the current winemaker Stefano Almondo’s father Domenico in 1991.
The grapes – 50% crushed and 50% whole berries – were cold-soaked for three days prior to fermentation with native yeasts. The fermentation temperature peaked at 28°C during the 17 days of maceration.
“The pre-fermentative cold maceration and the whole berries approach is something unique to our red Roeros,” Stefano tells me. “The idea rooted in this approach is to bring freshness.”
He adds: “We decided to bottle the 2016 a little sooner than usual; after 18 months of big cask, we put it in bottle in May 2018.” The Bric Valdiana bottling is usually made in August, just before the Arneis harvest.


Cantine Povero, family owned since 1837, has a new brand – Tenuta Laramè, after a family nickname – for its top line, replacing Tenuta Fratelli Povero.
The flagship for this line, Tumlin Roero DOCG, comes from a parcel of 3ha cultivated organically in the subregion of Loreto. Tumlin was the name of the family member who planted the vineyard in 1948.
The Povero family now owns 50ha of certified organic vineyards between the municipality of Cisterna d'Asti and Canale d’Alba. Although belonging to Roero, it is located on the border with the first ridges of Monferrato.
For the Tumlin, the must ferments in temperature-controlled stainless-steel tanks at 28-30°C for 12 to 15 days. MLF takes place the following month at 20°C. The wine is aged for 18 months in 2,500L Slavonian oak. After bottling, the wine rests in the bottle for at least one year before being released.
The estate maintains the woods surrounding the estate to safeguard their biodiversity. “This year, we also planted a truffle ground with 300 new oaks, which in 10 years will give us delicious truffles, precious gems that together with wine best describe the magnificence of these lands,” Lucrezia Povero tells me.

How to enhance the potential of white grapes

How to make a wine that's 'just beautiful'

Is time part of terroir?

Making a Nebbiolo in Australia