A Portuguese artist has created a sculpture that looks like a vineyard trellising system. But, if you look closely, you will see the wires are covered in silk…

A Portuguese artist has created a sculpture that looks like a vineyard trellising system. But, if you look closely, you will see the wires are covered in silk!
At first glance it looks like a very short row of young vines. But then your eyes go to the ball of silk thread on top of one of the wooden posts, and then to the knotted silk on the wires.
This unusual sculpture is gracing the grounds of Prosecco producer Cantina Bortolomiol’s Parco della Filandetta Wine & Art Farm in the centre of Valdobbiadene.
It’s the work of Inês Coelho da Silva, who studied sculpture in Porto, Portugal and London, England.
After immersing herself in the Prosecco territory and the history of the Bortolomiol winery, the visual artist and ballet teacher produced Ritratto (di colline) – Portrait of the Hills – which is an installation made of silk, vines, wood, and wire.

The second female artist to take up a residency at Bortolomiol’s ‘land art park’, Inês pays tribute to the tasting room’s former life as a spinning mill. After the Bortolomiol family bought and restored the building, they planted an organic vineyard there. The Glera grapes produce the organic Ius Naturae Valdobbiadene Prosecco Superiore DOCG.
Now, on the edge of the vineyard, stands the new sculpture. Created with organic materials, it comprises thousands of knots made from 40 metres of raw silk. The knots, which made the artist’s hands “sore and red”, are tied along the wires between the wooden posts. Four young vines have been planted between the posts and will intersect with the artwork as they grow. Inês told Canopy: “It will grow alongside the other plants in the vineyard and, hopefully, be covered by leaves and grapes!”
She also said this “work of patience and repetition” was typical of her style, as it blends in with the landscape around it: “My sculptural pieces, almost invisible when observed at a distance, unfold themselves in details for the spectator who decides to get closer.” 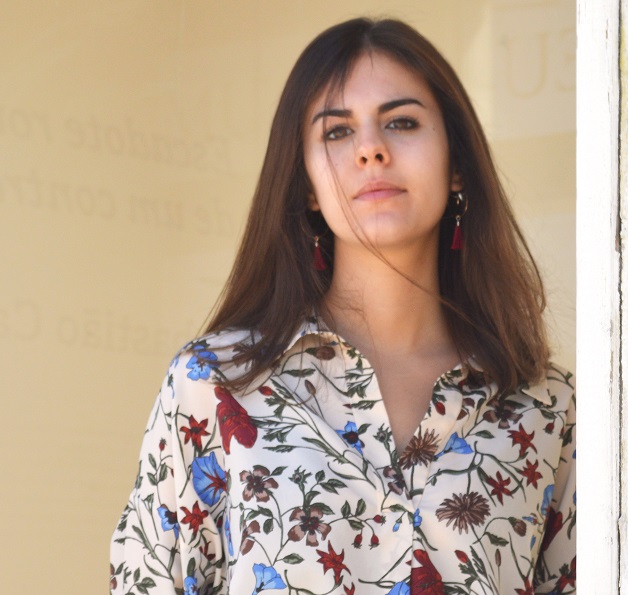 Inês (above) says in a poetic description of the sculpture: “The threads pass through my fingers, now sore and red, as I repeat the same movement again and again. Yet each of the thousands of knots in this portrait is unlike another, as my hands welcome the mistakes made along the way. I find myself tangling and untangling with the passion of a first romance and the fatigue of the last one.
“Connecting traditions and hopes, this is a work of impermanent configurations, a reaction to natural and hand-provoked stimuli. Poetry grows in controlled (and yet unanticipated) arrangements. At a distance, the piece blends itself into the territory as it resembles all the other vines that cover the hills: wooden poles go deep into the ground, while four wires run horizontally between them. The artwork asks the spectator (not yelling, but whispering) for them to notice it, to come closer. The wires are covered, almost entirely, by thousands of knots and entanglements of silk thread. An intimate proximity allows for the details of the intricate textile work to disclose a series of patient patterns and places of emotion. The knots entangle references and paean to a multitude of traditional labours, emotions and encounters linked to the artistic residency in which the piece was conceived and realised. This work of patience and repetition recalls the silk mill that once sat on these lands and the manual labour of the women who composed it. Underneath, four vine cuttings wait for time to allow them to grow and take over the structure. As the plants ask for the sun, water, care and time, the work waits with us.”

Cantina Bortolomiol is now run by the founder’s four daughters – president Maria Elena Bortolomiol, vice-president Elvira (president of the Consorzio di Tutela del Conegliano Valdobbiadene Prosecco DOCG), Giuliana and Luisa. Their mother, Ottavia, is also still involved.
As you might expect, they are great supporters of female creativity and this is the second time they have had a female artist in residence. The first, before the Covid pandemic, was German artist Susken Rosenthal, who created a work of art called Cocoon, which was also inspired by the history of the winery and the women who worked in the local spinning mills.
“We strongly believe in art as a cultural message from which wine can be nourished,” Maria Elena said, “and the Filandetta Park is the perfect place where this synergy emerges, combining our environmental, social and economic sustainability projects, in a container, Wine & Art Farm, which has placed solid roots in the heart of the denomination.”
The unveiling of the new sculpture is one of the events planned to mark the birth of Bortolomiol’s founder, Giuliano Bortolomiol, who was born in Valdobbiadene 100 years ago this year. He is remembered as the Prosecco producer who revived abandoned vineyards ruined by World War Two and went on to create the brut version in the 1960s, when sweeter wines prevailed in the region. He was also one of the co-founders of the Consorzio Conegliano Valdobbiadene.
Visitors to the tasting room can book a ‘Centenary Tour’, allowing them to taste five vintages of the Grande Cuvée del Fondatore Rive di San Pietro di Barbozza. The vertical tasting comprises the five vintages from 2016 to 2020.
“With these initiatives we want to pay our tribute to an extraordinary territory and wine, marked by a history of redemption in which our father has written an important chapter,” Maria Elena said. “Our role has been to respect his legacy but also to project the company into the future with new challenges: environmental sustainability, art, culture.”