While climate change has created new opportunities for winemaking outside the historical optimum zone for vine-growing, in countries such as England, Belgium, Canada, the Netherlands, and Sweden, it’s also wreaked havoc on vintners in many traditional winemaking regions, who now face greater threats of droughts, floods, frosts and fires.


What does the latest vineyard research tell us?

‘We are approaching a tipping point’

Warming temperatures over the past 60 years have led to increased wine quality, but a new study looking at sugar and colour content in grapes indicates there may be big trouble ahead. The research – a collaborative effort by the University of California, Davis, and University of Bordeaux – looked at the relationships between global warming, fruit ripening, and wine quality over six decades in the renowned red wine regions of Napa Valley and Bordeaux, and then confirmed the findings with a five-year trial in Napa.
The study shows that both regions have warmed substantially since the 1980s and that, until now, this warming has contributed to increases in the average wine quality. However, ripening relationships revealed that we are reaching a plateau and raise concerns that we may be approaching a tipping point in traditional wine-growing regions.

Some of the findings:


The report concludes: “In Napa and Bordeaux, viticulture has successfully adapted to a drastically changing climate thus far, but fruit-based metrics raise concerns that we are approaching a tipping point.”

Various strategies have been suggested for mitigating the impact of climate change in the short-term. According to this report, these include:


What does the latest research reveal about these strategies?

Another interesting piece of research from UC Davis suggests that California’s coastal grapegrowers could cut irrigation water by half without affecting yield or quality. The findings, published in the journal Frontiers in Plant Science, show that vineyards can use 50% of the irrigation water normally used by grape crops without compromising flavour, colour and sugar content.
“It is a significant finding,” according to lead author Kaan Kurtural, professor of viticulture and oenology and an extension specialist at UC Davis. “We don’t necessarily have to increase the amount of water supplied to grape vines.” 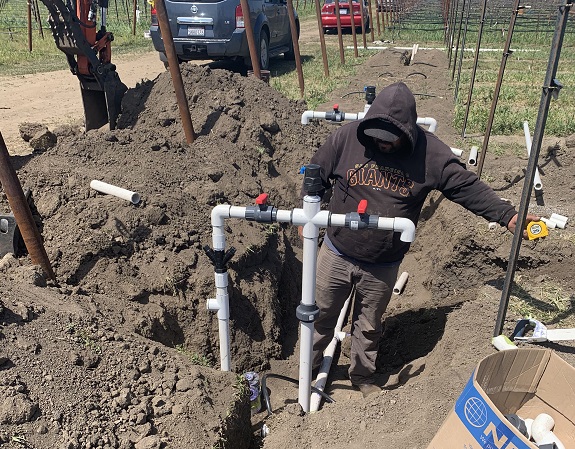 A drip-irrigation system being installed at a new vineyard at the UC Davis Oakville Station. (Kaan Kurtural/UC Davis)

Kurtural and others from his lab studied irrigation and Cabernet Sauvignon grape quality at a research vineyard in Napa Valley over two growing seasons, a rainy one in 2019 and a hyper-arid one in 2020.
They focused on crop evapotranspiration, which was the amount of water lost to the atmosphere from the vineyard system based on canopy size. The weekly tests used irrigation to replace 25%, 50% and 100% of what had been lost by the crop to evapotranspiration.
They found that replacing 50% of the water was the most beneficial in maintaining the grape’s flavour profile and yield. The level of symbiotic arbuscular mycorrhizal fungi, which help grapevines overcome stresses such as water deficits, was also not compromised. And the water used to dilute nitrogen application was also reduced, making the process more environmentally friendly.
The water footprint for growing grapes also decreased. For both the 25% and 50% replacement levels, water use efficiency increased between 18.6% and 29.2% in the 2019 growing season and by 29.2% and 42.9% in the following dry year.
While focused on Cabernet Sauvignon, most red grapes will respond similarly, Kurtural said. “In the end, drought is not coming for wine,” Kurtural said. “There doesn’t need to be a tremendous amount of water for grapes. If you overirrigate in times like these, you’re just going to ruin quality for little gain.”

‘Drought is not coming for wine’

For several years, Spanish professor Martínez de Toda, from the University of Rioja, has been researching ways to mitigate the effects of climate change through targeted shoot pruning. In a trial reported in the Vitis Journal of Grapevine Research, he was able to delay the ripening of grapes by around two months. His technique involved pruning the main shoot above the sixth node at the end of flowering, leaving the leaves, axillary shoots and existing clusters below that. By breaking the apical dominance, rapid side shoot growth is forced on the one or two uppermost nodes. The side shoots in turn form fruits for a second, later harvest.
In the trial, the grapes of the main shoot ripened about 13 to 15 days later and the grapes of the side shoots about 35 to 57 days later than those of the unpruned control plants. In terms of quantity, the second harvest was about 30% of the main harvest.
The second crop produced smaller berries with lower pH, higher acidity, higher tartaric and malic acids and much higher anthocyanins compared to primary crop.
The two-year field trial was conducted with Garnacha, Tempranillo and Maturana Tinta vines in a two-arm cordon system. Although longer-term studies are necessary, all indications are that the grapes of this double culture ripen well and that sufficient carbohydrate reserves can also be formed for the following year.
The report says it is “a bold method to fight against climate warming that could be only developed in really warm viticultural regions”. It states the main drawback is loss of yield, but the report also recognises that such techniques require extra manual labour.
Elsewhere, Martínez has said that other canopy management techniques, such as late winter pruning and minimal pruning, can delay grape ripening for 15-20 days.

Long-term adaptation strategies, according to this report, include: