Chris Boiling visits the trendsetting orange wine capital to talk about maceration or, as Saša Radikon calls it, ‘infusion’…

Some of the world's most sought-after orange wines come from the small hamlet of Oslavia, in northeast Italy

I’m in the spiritual home of orange wines – Oslavia, a small hamlet near Gorizia, in Italy’s Collio DOC, close to the Slovenian border. This is the region at the forefront of the Amber Revolution in wine.
It’s a predominantly white wine region but the key question at tastings here is: “How long was it on skins?”
The extended macerations – anything from two weeks to three months – add body, structure, complexity, and unique flavours to the wines. The winemaking here also typically involves fermentation by native yeasts without temperature control, long ageing in large oak barrels, natural fining, no filtration, low SO2 levels, and long bottle ageing.
These are very personal wines.


Across the table from me are representatives from seven of the world’s greatest orange wine producers, whose wineries are within 3km of each other. And on the table in front of me is a range of wines made from the village’s key grape variety, Ribolla Gialla. It’s an ancient variety with a long bunch and thick skins. Without skin contact it produces a light-bodied wine that’s high in acidity with slightly floral notes. With skin contact, it produces some of the world’s most sought-after orange wines.
This is what I learned from the wines and their producers.

The tasting took place at the Primosic family winery, which can trace its history to Carlo Primosic, who was sending wine to Vienna in large wooden casks at the end of the 19th century.
As Carlo’s grandson Marko shows us around the modern cellar, he explains that his ancestors used to ferment on skins for two weeks “because this was the only way to press this grape”. He continues: “The small hand press put so much pressure inside the grape that it sprayed the must around the room and not in the barrel, so in a very pragmatic way our grandparents used the same fermentation like for red.”
In the 1960s, with the introduction of temperature-controlled stainless-steel tanks, pneumatic presses, laboratory yeast strains, and Campden tablets, modern winemaking methods took over and Collio DOC wines were made “without wood and without skin contact”.
In the 1990s, the style changed again. Winemakers wanted “more power” from their Ribolla Gialla “and the idea was like for Chardonnay to use barriques because we can catch some toast notes from the wood and then age the wine”.
But this style was not a great success. Marko says it wasn’t a great marriage – “with the evolution, with the ageing, the wine and the wood move in different ways and they don’t find any match with age. The wood was young, the wine was oxidated or the wine was rich in acidity and was over-wooden”.
In the late 90s and 2000s, there was a rethink. Marko recalls: “In 1996 there was a very heavy hail here in Oslavia… and there was a time for thinking about all things, not only Ribolla. Producers in the area came to understand that barriques are not the way to recognise and realise something very interesting with Ribolla and the idea was to go back to our grandparents’ ways. If Ribolla is fermented in contact with the skins – part of the richness of this grape is in the skin – and so many producers started – my family too – to ferment the Ribolla in contact with the skins. For Joško Gravner, for example, in amphoras; for Stanko Radikon – the two pioneers in this area – with wooden barrels. We (at Primosic) chose the barrel. From the vintage 1999-2005 we fermented the Ribolla for just a week in contact with the skin.
“First ten years were very pioneering, experimental. Every year we tried to do more – one month, two months, three months. With vintages 04-06 some wines are probably too heavy for the market. Wine is pleasure so it has to be balanced.” 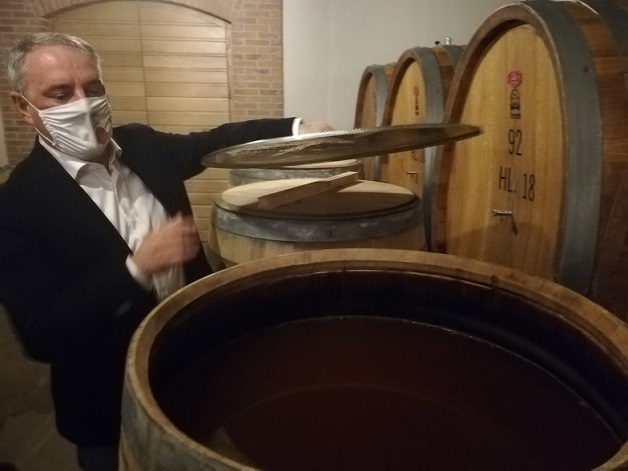 Marko lifts the lid on a vat of Ribolla which has been on skins for six weeks.
“The malolactic has finished,” he says. “Now it’s time to remove the wine from the skins.”
As we sit down to taste the wines, he says they have learned two “important” things at Primosic: “We understand that with too long a fermentation the risk is too high, especially for VA, and the second is that we need to put a little sulphite at bottling.” This is “to preserve the modern life of selling wine around the world”.
Upstairs, we taste the 2009 vintage.


Marko, who runs the business with his father Silvan and brother Boris, says 2009 was a milestone vintage for Primosic and Oslavia. That was the year the local winemakers agreed on a new winemaking protocol: indigenous grapes, spontaneous fermentation, some skin contact, no temperature control during fermentation, and no additions until bottling. Also, the wine could not have any overt oak flavours and it would be aged for at least one year in the cellar and three years before going on the market.
The 2009 was bottled with 30mg/L total SO2, but Marko believes that has disappeared from the wine we’re swirling in our mouths.


‘Extract all the riches of the grape’ 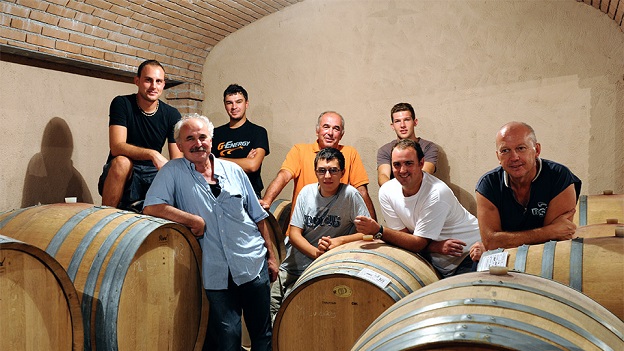 The Fiegls have been in Oslavia since 1782. Today, the winery is run by two generations of Fiegls. The brothers Alessio, Giuseppe and Rinaldo and their children Martin, Robert and Matej.
Their Collio Ribolla Gialla 2015, which I’m now sniffing, had 20 days’ skin contact. Martin Fiegl says skin contact enables them to produce a special wine every vintage.
“With the maceration process we can have something special every year, something interesting, because with the maceration we can extract all the riches of the grape,” he explains.
But how can you guarantee good grapes every year, I wonder?
The key is low yields, he says. In Fiegl’s case, that’s about 6T/ha. “When you do this, you can guarantee very good quality level every time.”

Il Carpino, set up in 1987 by Franco and Anna Sosol, with the help of Anna’s late father, Silvano, is now in the hands of daughter Naike and son Manuel. They have been making skin contact wines since 2002, starting with shorter macerations to find their way. “After four or five years we decided the exact time for us, for what we want, is around 60 days – two months,” Manuel states.
As we taste Il Carpino’s Ribolla 2012, he reveals the key to making this style of wine is patience:

Here, the only addition is “a small dose of sulphites before bottling”.


Patience has also paid off for Dario Princic, who started biodynamic farming in 1988 and bottled his first wines in 1993. We’re tasting the Ribolla from the notorious 2014 vintage, which was blighted by a very wet summer.
This wine started off as “an empty wine”, according to Dario’s niece Katia Ceolin, but has become “an interesting kind of wine” in recent years.
The wine had 35 days’ skin contact and spent two years in wooden vats. Prior to bottling, it spent a bit of time in a stainless-steel tank for “natural decantation”.
Like most of the wines from Oslavia, it is not fined or filtered and it is bottled with low levels of SO2 (15-20mg/L). “We want the wine to develop, we want the wine to change, so we always keep the sulphur levels really low,” Katia says.
Since 2015, Dario Princic has been using wood from the family estate for its barrels. 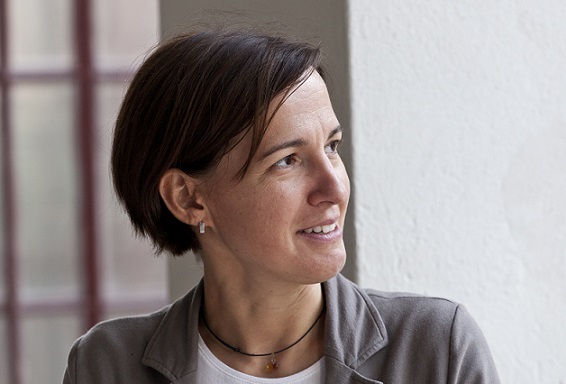 The latest release from Gravner, the standard-bearer for amber wines, is the 2013 vintage. Joško’s policy is to bottle his Ribolla wines in their seventh year. Typically, the handpicked, hand-selected and very ripe, healthy grapes undergo three to six months of skin contact in qvevri buried in the cellar. The exact time depends on the vintage and the quantity of stems added.
Desiring very ripe grapes means they must be patient, waiting for the picking day and also in the vineyard during the harvest. “Our harvesting is very, very slow,” Joško’s daughter, Mateja, admits. As 13 of their 18ha are Ribolla, it can take the experienced pickers 15-17 days to “deeply select” the grapes and put them into 20kg crates.
The bunches go straight into the qvevris.
Joško has been doing whole-cluster fermentations since 2017, following some successful experiments in 2016. This has enabled him to reduce the time on skins as the stems keep the skins submerged during the fermentation.
The rest of the winemaking has been consistent since 2001:

It’s all very simple – and in keeping with their philosophy. Wine is a food substance, so it should be made simply “because it is going into our bodies and our bodies haven’t changed that much over the past 6,000 years,” according to Mateja. “The simpler it’s done, the simpler it is for our bodies to accept, digest and use.”
The 2014 is already in bottles and will be released later this year.


Keep SO2 to a minimum 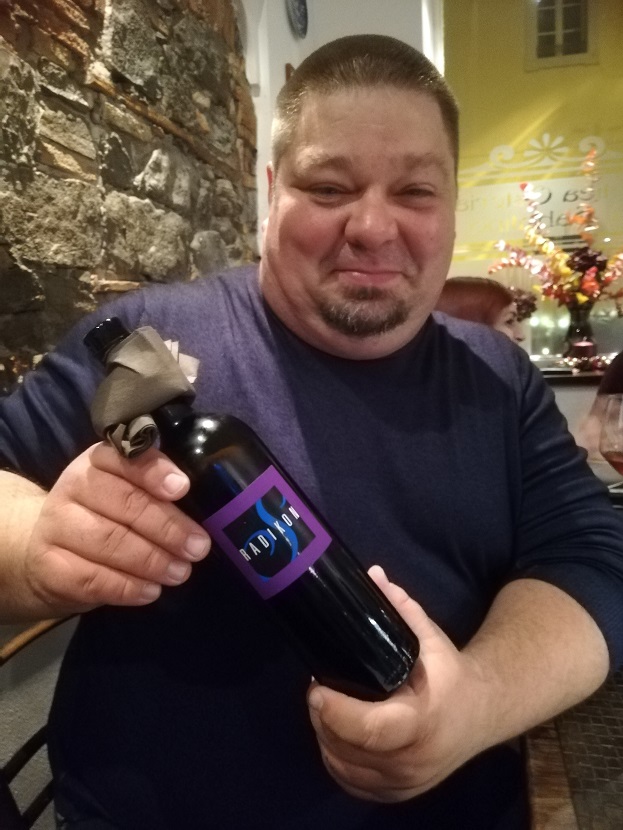 Skin contact? It’s really infusion, according to Saša Radikon.
His father, Stanko, started experimenting with maceration in 1995 and all the Radikon wines since 1997 have undergone extended skin contact. Oslavje 2000 stayed on skins for 30-40 days to finish MLF.
The new release, the Ribolla 2017, was kept on skins for three months.
Saša’s technique is of interest for winemakers who want to keep sulphite additions to a minimum.

“We don’t add sulphur if we don’t need. We are trying to make wine without sulphur, but on occasion we will add it,” Saša says.
If they do add it, it’s a touch before bottling.

The two weeks’ skin contact that Marko Primosic mentioned at the start of my visit seems nothing now. We have gone from Fiegl’s 20 days to Dario Princic’s 35, to Radikon and Gravner’s three to six months.
In the middle sit Il Carpino and La Castellada, where the winemakers opt for 60 days.
But with the tasting of the La Castellada Ribolla Gialla 2016, the focus turns to the élevage stage. The Bensa family, which has turned a tavern into a winery business, has experimented with everything for the maturation of its wines – large barrels, cement tanks, stainless steel, French barriques, and are now back to using large barrels again. The kind that Matteo and Stefano’s grandfather used in the cellar below the tavern.
Their Ribolla Gialla 2016 spent three years in these large barrels and one year in steel.

A tale of two amber wines