Visiting the ‘Jurassic Park of viticulture’

Bentu Luna has built a modern, practical winery in Sardinia to “give value” to old vineyards where local families still work with oxen and horses…

Bentu Luna, a modern and innovative wine brand from Sardinia, is one of the most sustainable projects I’ve come across. Sustainability is at the heart of the new winery and is the soul of the business model.
Bentu Luna doesn’t own any of the 20ha of old vines growing grapes for its red and white wines; it has long-term and generous contracts with 49 of the families that have owned these small parcels (0.5-2ha) for generations and kept them long after they became uneconomical and long after their neighbours had abandoned their gnarly old vines.
This project gives value to the old vines in Sardinia’s hinterland and a guaranteed income to the farm-owners who tend them with borrowed oxen and horses, because they were planted long before tractors became the normal workhorse in the world’s vineyards.
Many of the vineyards in this project are around Neoneli, a commune in central Sardinia – an area dubbed a ‘Jurassic Park of viticulture’ because little has changed in the past 200 years. The small villages are surrounded by many fields, each with a specific purpose: breeding, pasture, vineyard, or orchard.
All the vineyards on this plateau (350-700m asl) are close to each other and each parcel has been passed down for generations. But as the vines become older, the yields drop to 2,000-3,000kg of grapes per hectare, the gaps grow larger, the vineyards become less viable and the younger generation loses interest or moves away, there was a danger that the beautiful old vines and vineyards, like these (below), would be lost forever. And when they disappear, the wine culture surrounding them vanishes too.

Aren’t they beautiful? Alberello-trained vines near the towns of Mandrolisai and Barigadu, (in the provinces of Oristano and Nuoro). The vines range from a minimum of 35 years up to 115. 70% of the vineyards have an average age of 40 years while the remaining 30% have a minimum of 60 years. About 10% exceed 70 years.
Gabriele Moratti, owner of sparkling wine specialist Castello di Cigognola in Oltrepò Pavese, and his CEO, Gian Matteo Baldi (above), recognised the danger of losing these incredible old vines and the local wine culture, so they set up Bentu Luna in Sardinia in 2019.
“We rent the vineyards, we hire the grandchildren to look after the vineyards, then we make the wine in order to give value to the grapes,” Gian Matteo explains. “From the money we get from the sale of the wine we pay very well the rent and the people working (in the vineyards).”


Bentu Luna has introduced some modern technology to help make their lives a little easier – in the form of weather stations and an app developed by Friuli agronomist Giovanni Bigot.
While in the vineyard, winemaker Emanuela Flore (above) opens the 4Grapes app and shows me the historical information on each vineyard and vine – and how they looked this time last year.


In the winery, Giovanni joined us by video call (above) to explain how the vineyard workers collect data in their phones, using his app. The data collected on yields, foliage, relationship between leaves and production, health of the grapes, type of bunch, water stress, vigour, biodiversity and microorganisms, and age of the vineyard is processed by software from the University of Piacenza, and allows them to compare the quality of the grapes and micro-vinifications with the work they have carried out, and to intervene before a problem develops.
The goal is to check the ecosystem is in balance and predict any insurgence of disease so they can “reduce intervention in the vineyards”.
Everything is weighed and measured – including sample bunches and prunings (below). 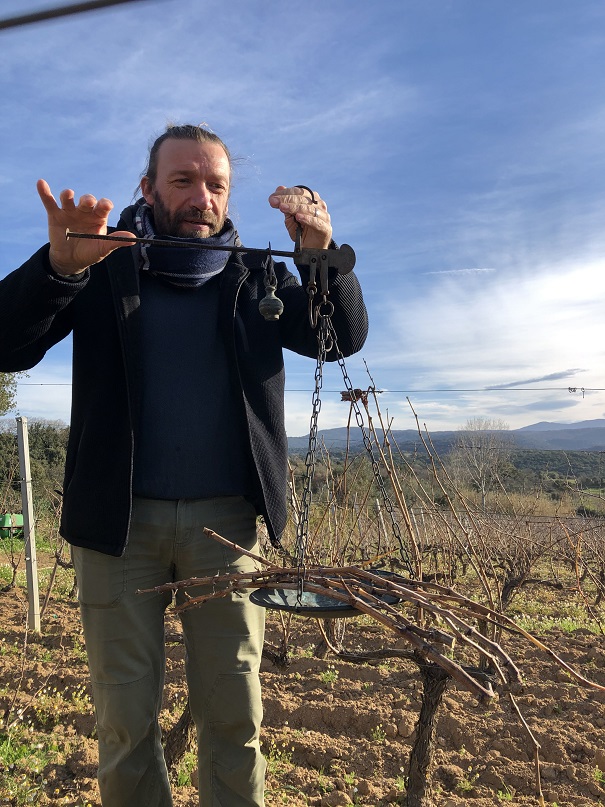 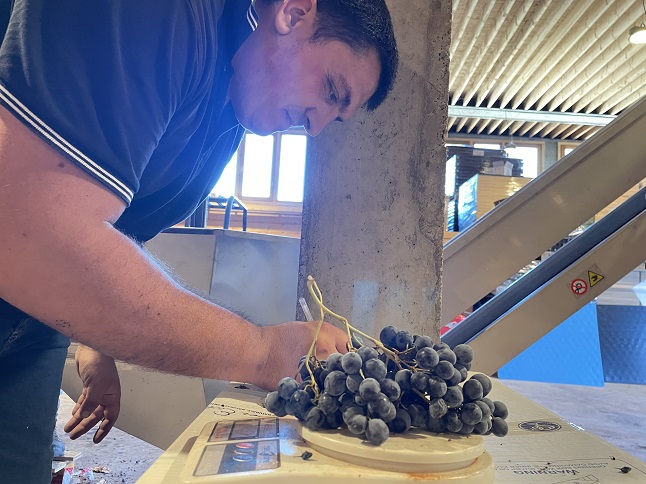 Giovanni and the vineyard team also taste the grapes prior to the harvest.

The winery, based in Neoneli, has a boutique look and feel. Designed by architecture company Magaze, the main building is made from local trachyte stones whereas the tasting room and offices are made from wood, glass and concrete. The winery also has open-air spaces for outdoor operations, such as pressing. 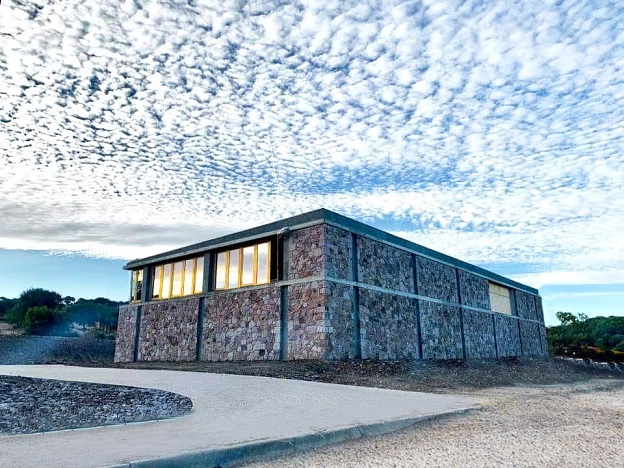 Windows are only on the north side of the winery to let in natural light (and save energy), without magnifying the heat. To further reduce the sweltering summer heat without resorting to air-conditioning, the roof is planted with grasses and sedum, and cork is used for insulation. The temperature inside is around 20°C all year round, even when it’s 40°C outside.
Wastewater from the winery is reused in the rock gardens around the winery. About 30 native plants grow here.
Local craftsmen and materials were used in the construction, and the building was erected in eight months.
Gian Matteo says: “If you do something that doesn’t make any sense from an economical point of view, it cannot last. So, we thought even the cellar should be built in a way that should be efficient, practical, and not too expensive. Especially in Italy, but I would say everywhere in the world, we had a time when producers thought they should spend lots of money on building cellars. That has an effect on the price of wine. You cannot think that you spend millions and you don’t put it on the price of the wine. We would like to put more value coming from the grapes than from cellars or other issues which are not directly related to the wine.”

Inside the winery, there is only space for what Gian Matteo terms “warm recipients”. That means wood, cement, amphorae and some demi-johns. The beautiful cement tanks (2,200L) are the Diamante model from Italian manufacturer CLC.

Bentu Luna produces six wines – four reds and two whites. All are from “extreme organic farming, spontaneous fermentation in concrete tanks, oak and amphoras with temperature control, basically no additives, clean on the nose, great winemaking precision, no brett, no oxidation”, according to Gian Matteo.
In keeping with the winery and vineyards, the winemaking is very simple but highly effective. These are high-quality wines that showcase the terroir.
Gian Matteo says: “If you use a method like Ripasso or orange wine, you tend to impose a kind of human culture into the wine. The idea was instead to give great value to these great grapes that are coming from old vines. So, trying to respect the grapes the most and to give a stronger local identity. And at the end, the idea was to find the best way to transform the grape into wine using the least possible energy either mechanical or electrical – touching the grapes the least. So, the method is a bit that way because most of the fermentation is in the grape itself. And everything since then is very, very soft. To exploit the talent of a great grape we should touch it the least as possible.
“The more energy you use, the more you lose.”

Gian Matteo says the goal is to make wines that are “real, true, natural but at the same time really drinkable and easy to approach”.
Regarding the winemaking protocol, he says: “It’s still a work in progress. The timing of the rack-off, for example, is something we learned better from the second harvest onwards.”

The flagship red wines Be Luna and Susu come from single vineyards. Be Luna’s vineyard in the municipality of Atzara was planted in 1905 with pre-nursery vines, so there are six different biotypes of Cannonau (35% of the blend), and four or five of Bovale (35%) plus 30% Monica. Susu is 100% Cannonau and the only single varietal vineyard in the portfolio.
Be Luna and Susu mature for eight months in second-fill barriques.
Mari and Sobi are blends from several small, mixed vineyards. Mari showcases Mandrolisai DOC and Sobi represents vineyards located near the winery in Neoneli (Oristano). One of the Mari vineyards got the highest score in the Bigot Index – 98/100.
Mari is aged for six months in second-fill barrels and Sobi is aged for eight months in large oak barrels.
Amphorae are used for fermenting a portion of the white wine made from Vermentino. Again, they layer the whole berries and whole bunches.
In-house winemaker Emanuela, who has a master’s degree in viticulture and oenology from the University of Turin and a master’s degree in wine marketing from the Università Cattolica del Sacro Cuore in Piacenza, is advised by some high-calibre consultants: Nicolas Secondé on the pressing processes, Federico Staderini on spontaneous fermentations, and Beppe Caviola on blends.