3 lessons from the Colli Euganei

What I learned from a brief trip to the Euganean Hills, west of Venice…

The Colli Euganei is a special, strange-looking area - with plenty of inspiring winemakers

Move with the times or stay close to your roots


I’m drinking Prosecco rosé in the cellars of a monastery founded in 1080. It’s a wine made with the help of the monks at the Abazzia di Praglia, the largest Benedictine Abbey in Italy. The most interesting thing about this wine is that the Benedictine monks, who used to sell their Glera grapes, chose to produce a pink Prosecco as soon as it became an option. The Abbey of Praglia’s winery in Teolo, however, is better known for its classic-method sparkling wines.
The enchanting Abbey of Praglia, at the foot of the Euganean Hills, is surrounded by 13ha of vineyards and has the distinction of being the only abbey where Benedictine monks continue to produce “bubbles”, following in the footsteps of the 17th century Benedictine monk Dom Pérignon.
Father Ignazio, who is responsible for the production of the wines here, took me to the cellar, created by emptying the water tank under the hanging cloister in the centre of the abbey. Nearby, in another vaulted room, is the place where the sparkling wine bottles are stored before disgorgement (below). 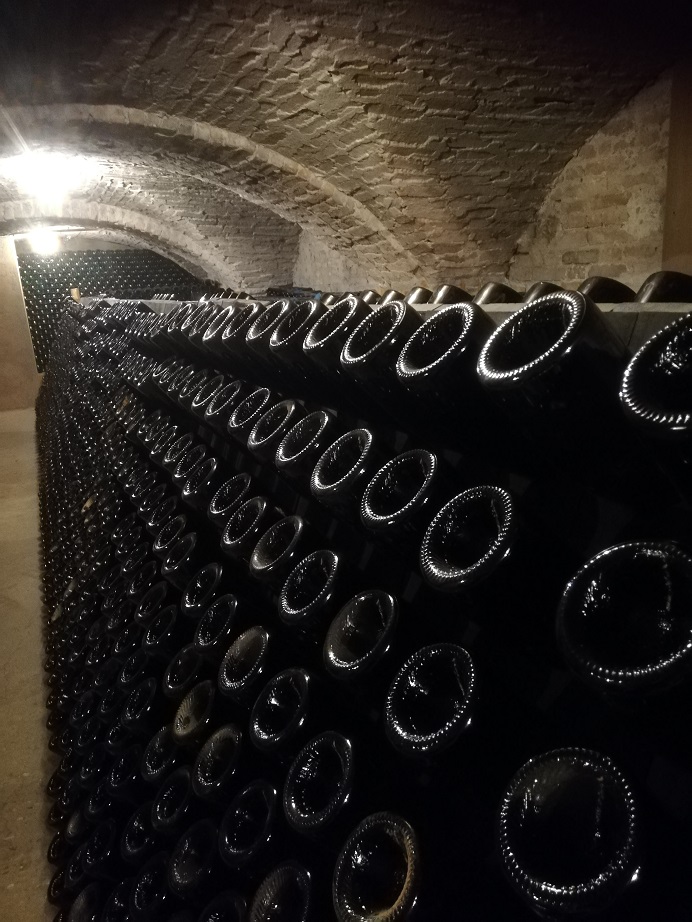 Production includes the Domnus Abbas Extra Brut, made with Garganega, Chardonnay and Raboso grapes, and Emeritus, an extra brut blanc de noir made exclusively from Raboso – a red grape with high levels of tannin, medium alcohol potential and low pH.
Apart from the monks’ Prosecco rosé, most of the other Charmat-method sparkling wines made with Glera grapes that I came across in the Euganean Hills, less than an hour from Venice, were called Serprino. Although it was described to me as “Prosecco from volcanic soils”, the producers here have decided not to cash in on the popularity of Prosecco. Instead, they call their ‘Italian-method’ sparkling wine by the local name as they sell most of it locally.


The Colli Euganei is a special, strange-looking area. There are about 100 conical hills within a 200sq km area south of Padua and west of Venice. At first glance they look like volcanoes, but there is no crater at the summit and no hardened lava on the slopes. They have a volcanic core, but they have never erupted. Each was created independently during a series of seismic shifts of rock substrata, so each has its own peculiar shape, soil and mineral composition.
Which is great for winegrowers. It’s a small, beautiful, and diverse region producing elegant and complex whites, reds and sparkling wines.
The climate is complimentary, too, generally mild and more similar to Tuscany than the rest of Veneto, as the olive trees and cypresses attest.
Grapegrowing and winemaking took off with the rise of monasteries in the Middle Ages, with French varieties coming on the scene in the mid-19th century.
These still dominate and the region’s red blend, Colli Euganei Rosso, usually features Merlot, Cabernet Sauvignon, Cabernet Franc and Carmenère (brought here as Cabernet Franc in early 19th century). The thing that makes it different to most Bordeaux blends is the inclusion of the ancient Venetian variety Raboso – one of few local varieties to survive the voracious replanting of vines that occurred after the phylloxera epidemic. Raboso adds colour, tannin and acidity to the blend. It is also highly resistant to fungal diseases and rot.
However, one of the best examples of a Colli Euganei Rosso I tasted was the Mottolo di Baone’s Serro, which comprises 64% Cabernet Sauvignon, 30% Merlot, and 6% Cabernet Franc. The handpicked and selected bunches are fermented partly in steel and partly in wood for 14-18 days with daily pumpovers and some delestage. The wine matures in new tonneau and a mix of new and used barriques for 22 months, before blending and another 12 months in bottles.


Another good producer of reds is the Vignalta winery in Arquà Petrarca, one of the first wineries in Italy to install a photovoltaic system (above). Its flagship wine is the single-vineyard Gemola. The newly-released 2016 – a blend of Merlot and Cabernet Franc – is fermented in tanks so they can control the temperature. Extraction is through regular pumpovers for two weeks. After the fermentation, the wine matures for two to three years in new French oak tonneaux.
I also enjoyed Vignalta’s elegant Carmenère Reserve 2018. They describe Carmenère as “the most demanding” of the Bordeaux reds, but say the local soil “puts the vine under water stress, breaking the vegetative excesses” and allowing the wine to develop spicy aromas in large barrels.
The region’s white blend, Colli Euganei Bianco, features 30-65% Garganega, one of the most widely planted white varieties in the Veneto. Sauvignon Blanc, Tai (formerly known as Tocai Friulano), Chardonnay and Muscat are also popular components.
But the two whites that stood out for me were Quota 101’s Manzoni Bianco and Fior d'Arancio. 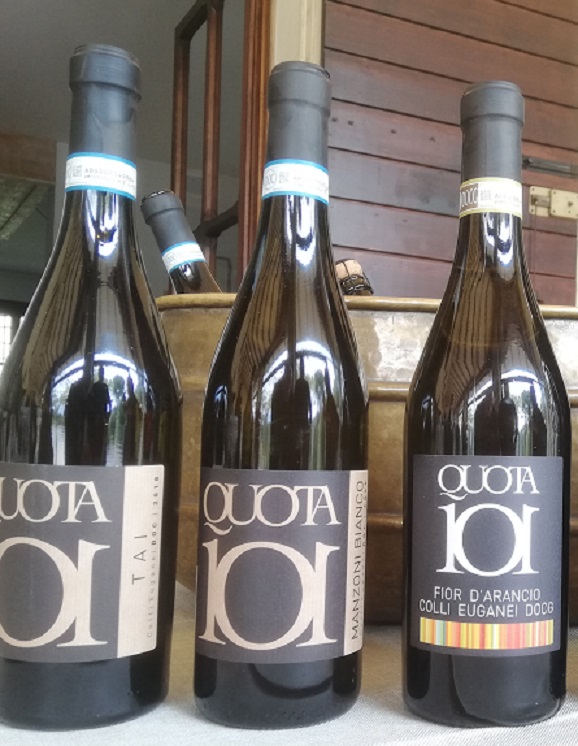 Manzoni Bianco is a crossing of Pinot Blanc with Riesling, created in the 1930s by Professor Luigi Manzoni. Quota 101 softly presses the whole bunches and lets the juice settle overnight before inoculating for fermentation. 50% goes into wood, while the other half goes into stainless steel for fermentation at 15-16°C.


The family-run Quota 101, in Torreglia, is named after the altitude at which the company is located. Started in 2010, it is run by Roberto Gardina, wife Natalia and their daughters, Silvia and Roberta (graduates in law and engineering). Pictured are Roberto and Roberta.
I also enjoyed their Fior d'Arancio, a bone-dry Yellow Muscat (Moscato Giallo), which is made by destemming and softly pressing the grapes without adding sulphur. Static settling for 12 hours is followed by racking, an addition of sulphur and inoculation with selected yeasts. Fermentation takes place partly in oak tonneaux and partly in steel at 15-16°C.

Work together for the common good


I finish my brief tour of the Colli Euganei at the Fai Villa dei Vescovi, in the charming hillside town of Torreglia (above). It’s an exquisite, early 16th-century, proto-neoclassical villa, surrounded by beautiful gardens and a vineyard. One of the outbuildings has been turned into a wine information and tasting centre, Enoteca Strada del vino Colli Euganei.
It’s good the see the wine producers, the region and young entrepreneurs working together to enhance the wine tourism offer. It’s also a beautiful setting and will introduce the local wine scene to villa visitors. They will learn the difference between Serprino and Prosecco; the similarities between Colli Euganei Rosso and Bordeaux reds; and the outstanding local grape varieties, such as Manzoni Bianco and Raboso.