How much will mechanised pruning save me? Is there a new way to fight powdery mildew? What’s the best technique for delaying ripening by three weeks? Are ants pests? New studies offer some intriguing answers…

Converting to a the semi-minimal pruned hedge could save you more than €2,000 per hectare per year

How much will mechanisation save me?

Researchers in Germany have worked out the cost saving from mechanised pruning. By analysing the viticultural costs of vertical shoot positioning (VSP) and low-input training systems, such as minimal pruning (MP) and the semi-minimal pruned hedge (SMPH), for standard processes on different types of flat terrain and steep slope vineyards, they discovered:


The report, published in OENO, concludes: “The study confirmed the high cost-saving potential for winegrowers of the mechanisation of canopy management and the omission of winter pruning in low-input systems. Combined with higher yields, the cost savings from low-input systems are particularly suitable for producers of bulk wine and market entry and mid-level wine profiles. By converting to low-input systems, the costs associated with mechanisable steep slope vineyards can be reduced to amounts approximating VSP on flat terrain. For certain wine profiles, low-input systems should therefore constitute an integral part of strategies to increase the economic sustainability of steep slope viticulture.”
The study was carried out in 20 vineyards belonging to five German wine estates over three years (2017-2019). The estates – in different regions – were: Hessische Staatsweingüter Kloster Eberbach (Rheingau), Juliusspital (Franken), Bischöfliche Weingüter Trier (Mosel), Landesweingut Kloster Pforta (Saale-Unstrut), and Staatsweingut Meersburg (Baden).

One of the many challenges for grapegrowers posed by climate change is the accelerated rate at which grapes ripen in warmer climates, which can result in poor colour and aroma development.
In a new study published in the Journal of Agricultural and Food Chemistry, researchers from the University of Adelaide found it is possible to increase the flavour potential of Cabernet Sauvignon grapes by slowing down the ripening process with strategies including crop load manipulation and irrigation management.
Lead author Pietro Previtali (below) from the University of Adelaide’s School of Agriculture, Food and Wine, explained: “Advanced maturation due to warmer temperatures is a key issue for grapegrowers in most wine regions worldwide and especially in warm and dry areas such as Australia and California. 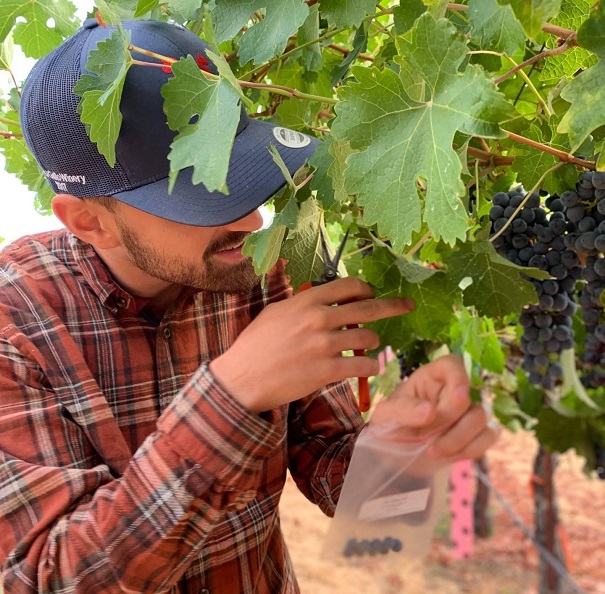 “It leads to faster sugar accumulation in grapes, which results in reaching the targeted sugar levels when the concentrations of colour and aroma compounds are below their maximum values.
“Growers therefore have to compromise between harvesting when sugar is ready but the desired flavours are missing, and prolonging grape maturation until an optimal composition of colour, mouthfeel and aroma compounds is achieved.
“The problem with prolonging maturation is grapes undergo shrivelling and yields are reduced with a negative consequence on profitability, and higher sugar levels that lead to high-alcohol wines.”
Where earlier research has found techniques such as thinning vines and intense irrigation late in the growing season can change wine composition, the new study examined how these techniques specifically affect the development of aroma compounds in the grapes themselves.
The researchers used Cabernet Sauvignon grapes from an E & J Gallo Winery vineyard in the San Joaquin Valley in California for their study. The vines were either thinned, or irrigated late in the growing season, or both, with grapes collected throughout the ripening period. These were compared with grapes grown in the same block where neither technique was applied.
The researchers found that delaying ripening slowed down sugar accumulation, which led to a decrease in green aroma compounds, and increased fruity aromas, colour and mouthfeel compounds. Specifically, they found that:

They also observed that the composition of grape quality traits is not dependent on a single strategy.
“Rather, groups of compounds were responsive to different factors, including crop load, irrigation, ripening rate and in some cases an interaction of these,” Previtali said.
Using the strategies available, the researchers sought to achieve the longest delay possible to study the relationship between sugar accumulation and flavour development. For example, a delay of three weeks was achieved through a 35% reduction of crop load and late season irrigation of 50% additional water.
“While representing a valuable experimental tool, this approach however may not be practical due to availability and high cost of irrigation, particularly as water becomes a scarcer resource,” said project lead and co-author, Associate Professor Christopher Ford, of the University of Adelaide.
“Tailoring the management of these strategies seems to be the way to achieve the targeted levels of aroma compounds, colour and mouthfeel in wines.”
The researchers say replication of these vineyard trials over future seasons is necessary to fully understand the implications of year-to-year variation, and develop a broader understanding of combining crop load and late season irrigation to delay sugar accumulation.


Is there a way to fight powdery mildew at the genetic level?

Spray-induced gene silencing (SIGS) is a new weapon in the fight against powdery mildew.
Already shown to control the growth of fusarium in barley and botrytis in other plants, SIGS is being researched as a tool to “turn off” powdery mildew’s mode of infection.
With funding from the American Vineyard Foundation and the National Science Foundation, researchers at the University of California, Berkeley, have successfully developed the methodology “to identify novel powdery mildew targets that when silenced reduce powdery mildew disease of grapevine and are translating and testing this approach in the vineyard in a highly timely manner”.
The research is continuing but so far they have had “a 60% success rate in identifying efficacious novel targets, with reductions in powdery mildew proliferation ranging from 2- to 5-fold compared to the controls”.


The research team is now assessing and optimising the technology in the field. They estimate it could become available to growers in three to five years.
Also known as RNA interference (RNAi), the technology controls powdery mildew disease (shown above) by shutting down the production of certain proteins that allow the mildew to grow on plants.
“The mildew is less likely to develop resistance against this technology compared to traditional fungicides, and it reduces the need for chemical fungicide applications,” said lead researcher Mary Wildermuth, an associate professor of plant and microbial biology at the university.
The technology used by Wildermuth and her team effectively sabotages the production of certain proteins that allow the mildew to grow on plants. It works at the genetic level, interfering with the messenger ribonucleic acid, or mRNA, that the mildew needs in order to translate its DNA into specific proteins. The researchers accomplished this task by using specially designed molecules known as double-stranded RNA, or dsRNA, that enter the mildew’s cells and convert into smaller molecules called small interfering RNAs, or siRNA. These siRNA bind to the targeted mildew mRNA – and only the targeted mRNA – and chop it into bits, which shuts down the protein-making pathway. In other words, “it takes advantage of a process that already exists in the powdery mildew,” Wildermuth said.
“The designed dsRNA is specific to the powdery mildew target, RNA is a naturally occurring compound, and it is degraded through natural processes,” she added.
Wildermuth and her research group have been studying powdery mildew and host plant interaction for more than 15 years. In recent years, Wildermuth, assistant project scientist Jyoti Taneja and graduate student Amanda McRae (who recently completed her doctorate degree) sought to develop the spray-applied or topical RNAi technology for use against grape powdery mildew (Erysiphe necator) which, Wildermuth said, accounts for 90% of the pesticide use for grapevines in California.
Eventually, the researchers hope to expand their work to other species of powdery mildew, such as those that target roses, melons, squash, cherry and apple trees, Wildermuth said. For now, however, they are keeping their primary focus on grape powdery mildew.

Do you have any idea how many different types of ants are in your vineyards – or what role they play in the ecosystem?
Ants, one of the most widespread groups of terrestrial arthropods, are considered a good proxy group for biodiversity monitoring.
Researchers from the University of Parma, studying ants in Italy’s Adige Valley, found 22 species – 7-16 per vineyard. Three species – Formica cunicularia Latreille, Lasius niger Linnaeus, and Tetramorium cf. immigrans Santschi – accounted for more than 85% of the specimens collected in the ten Pinot Grigio vineyards, all farmed conventionally. And all three were found in every vineyard in the study. Their report, Assessing ant diversity in agroecosystems: the case of Italian vineyards of the Adige Valley, states: “The numerical dominance of these three species likely reflects their ability to fill empty niches created by human activities.”


Only about half (54%) of the species were also detected in pitfall traps on the vines themselves. This is not a surprise as species such as A. subterranea, H. eduardi and M. graminicola usually forage on the soil surface or within the leaf litter.
Twenty-two species sounded quite impressive to me until I discovered that researchers in Australia detected 147 species in 50 vineyards (30-40 species per vineyard) and Brazilian researchers recorded 72 species (21-50 per vineyard). The Parma researchers weren’t as surprised as me as “ant diversity is notoriously higher in the tropics”.
Researchers in Portugal only found 20 species in total, but the number of species per site was averagely much higher than in the Adige Valley (at 15-20), as was the number of species (9) common to all their six investigated vineyards.
Despite this and other research, the role of most ant species in controlling other arthropods, fungi or weeds and boosting uptake of nitrogen still remains a mystery. Only three ant species – the worldwide spread invasive Argentine ant Linepithema humile, the South American L. micans and the North American Formica perpilosa – have been the subject of several studies considering them as significant pests requiring control strategies in vineyards of California and Brazil. On the other hand, another invasive species, the red imported fire ant Solenopsis invicta Buren is considered a positive presence due to its significant predatory action on pest species in Texas’ vineyards.