From the best! Sergio Martínez, IWC Fortified Winemaker of the Year, talks about this key step in the Sherry-making process and about Emilio Lustau’s Champion Fortified Wine…

American oak casks in the cellar of Emilio Lustau

For Sergio Martínez, the IWC Fortified Winemaker of the Year and the cellarmaster behind this year’s champion fortified wine, managing the flor in the historic cellars of Emilio Lustau is a crucial part of his job.
The flor, Sergio says, is “like my children, the most delicate thing in the bodega”. To check its condition and the way it’s developing, he constantly tastes wine from casks. In Andalucía’s damper and cooler spring and autumn, it’s easier to manage. In the dry, hot summer and cold winter, it’s “more difficult”.
Managing means opening and closing windows depending on the direction and warmth of the wind, and moistening the sandy floors (the same yellow sand used in Andalucía’s bullrings).
“The flor is very delicate,” Sergio continues.
More so in Jerez de la Frontera than on the coast in Sanlúcar de Barrameda and El Puerto de Santa María. “The flor yeast closer to the coast are stronger, less delicate, more constant than those in Jerez,” he informs me.
In Jerez, they sprinkle the sandy floor with water at least three times a week in summer. In Sanlúcar and El Puerto, once a week is usually enough. 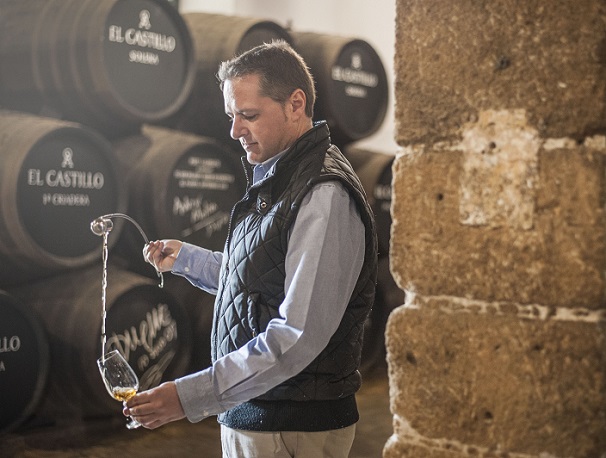 Taking care of the ‘velo de flor’ is one of the most important roles for a cellarmaster in a Sherry house. “Every step is important but, it’s true, flor is very, very important especially in order to guarantee a wine with certain characteristics after four or five years, either fino or manzanilla.”
But caring for the flor complicates other important steps in the production of Sherry. During the saca (extraction) and rocío (refilling) stages – where Sergio and his team are adding or removing wine from the solera system – they have to do it with “no flor movement”.
This means taking from and adding to the centre of the barrel without disturbing the flor floating on the top or the sediment at the bottom, using slow-speed pumps calibrated at 12-13L per minute that ‘sprinkle’ the new wine out sideways.
Sergio says the other crucial thing regarding Sherry production is maintaining the quality of the solera by always replenishing it with wines of a similar quality.
Sergio should know. Last night he was named IWC Fortified Winemaker of the Year for the fifth consecutive year. His predecessor, Manuel Lozano, took the crown seven years in a row. In total, Emilio Lustau cellarmasters have won the title 14 times since 2002.
However, last night was the first time one of their wines – the Palo Cortado VORS 30 Years – was named the Champion Fortified Wine, receiving the Manuel Lozano Trophy that usually goes to Port and Madeira houses. This trophy is named after Lustau's legendary Sherry winemaker who died at the age of 61.


On a video call with the VORS solera behind him, Sergio admitted the award means more because Manuel contributed to this wine. Sergio, who started as a trainee at the famous Sherry house in 2003, worked by Manuel’s side for 13 years. With chalk and venencia in hand, they strolled the aisles together, marking each butt in the solera ageing system carefully while monitoring the content’s evolution.
Sergio learned his lessons well and continues to improve on the casks and wines he inherited. “This is a heritage at the end of the day,” Sergio reflects. He knows he is also building wines for his successors.
I suggest it’s a lot of responsibility.
“It’s an honour,” Sergio replies, “and I’m very proud of it.”
The seven casks in the solera for the Palo Cortado VORS 30 are 500L American oak, with an average age of 50 years but some could be as old as 70 or 80. All were seasoned with oloroso before joining the palo cortado solera. All are full to the bung.


The wine has an average age of 30 years but some of it could be up to 45 years old.
What pleases Sergio about this wine is that “despite being a wine that has more than 30 years of average age, and is very concentrated, you still have a touch of that initial biological ageing”. Maintaining this initial character through the long ageing process “is very, very difficult,” he admits.
It can easily disappear through evaporation, concentration or as VA rises.
Elsewhere in the cellars are the other casks “supporting” this special solera, providing the wines to replenish it when he extracts up to one cask-worth (500L) annually for bottling.
There is a huge amount of history in the cellar, the barrels and the wines. Although Sergio is following in the footsteps of great cellarmasters like Manolo Arcila, Juan Fuentes and Manuel Lozano, he is also making his mark by bringing in new ideas “to improve what was really good” and to keep the style and quality of Lustau. 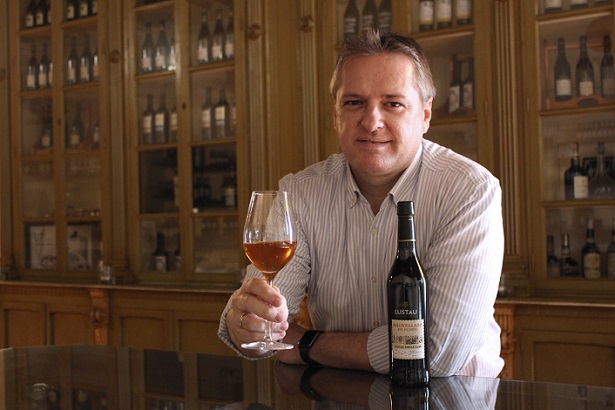 The main change he has made is “more consistent VORS”. He tells me they were always excellent wines, but they could vary from one year to the next. “It’s been one of my purposes to have a more consistent solera for VORS Sherries,” he says.
He has also brought in new pieces of equipment to make the job safer and easier.
As well as the slow pump, there are adjustable platforms for solera work. The old system of saca and rocío required two people at least, long hoses and scaffolding. The new system is more automated: with a joystick they can control an automated platform and the pumps are motorised. He has also introduced an infrared ‘pistol’ to replace the wooden stick (aspilla) used to measure the volume of Sherry in the casks. Sergio points out it’s more hygienic and there is no danger of contaminating one solera with the flor from another.
Apart from this, he works as Manuel taught him:

Only about 2% of the casks in the cellar will produce a palo cortado. Sergio, whose favourite style is amontillado, admits palo cortado is a style that only seems popular with Sherry lovers; for people new to sherry it’s “really weird and difficult to understand”.
I take this as a compliment for the IWC judges who loved the amber-coloured wine’s “beautifully aromatic nose of hazelnut, pecan and citrus peel” and its “complex flavours of bitter orange, old wood, spice, marmalade and nuts”. Truly a champion wine from a champion winemaker.