Which wines won prestigious trophies at the rigorous blind tasting? Canopy also looks at some of the gold and silver medal winners…

The International Wine Challenge, the world’s most influential, impartial and rigorously judged wine competition, has announced the results of its 2022 competition, with medals awarded across the globe, from Spain and New Zealand to India and Georgia. Thousands of wines from more than 50 countries entered the annual competition which was judged by an international panel of wine experts in a series of rigorous blind tastings in London last month.
The full list of medal and trophy winners can be viewed here, but here are the highlights…

France, not surprisingly, was the most awarded country in each medal category, with 75 gold, 367 silver and 442 bronze medals. The Champagne region alone picked up 30 golds, with Rare Champagne claiming the prestigious Champagne Trophy for its Rare Millésime 2008.
Rhône producer Maison Delas Frères succeeded in reclaiming the International Syrah Trophy from New Zealand for the first time in almost a decade for its Les Bessards 2019 and France also retained the International Pinot Noir Trophy for a seventh year in a row. The winning wine, Clos de la Roche Grand Cru Cuvée Cyrot Chaudron Hospices de Beaune 2020, from Burgundy producer Maison Albert Bichot, was also crowned with this trophy last year for its 2019 vintage.
International Wine Challenge co-chair Sam Caporn MW (main photo) commented: “Once again we have been reminded of the outstanding quality of the wines produced in the French regions of Burgundy, Champagne and the Rhône.”

After being pipped to the International Sauvignon Blanc Trophy two years running, New Zealand reclaimed the honour this year with Yealands Estate Single Block S1 Sauvignon Blanc 2021. New Zealand also showed its strength in depth, winning three of the five gold medals awarded to wines made from this variety.
“In this year’s results, more than 20 countries were recognised for their Sauvignon Blanc wines and so competition for this trophy is becoming increasingly stiff. New Zealand winemakers will be particularly pleased with the results this year, having lost out to Austria last year and South Africa the year before,” explained IWC co-chair Tim Atkin MW.
New Zealand gained 17 gold medals in total with a wide range of grape varieties. Syrah and Pinot Noir as expected but there were also a couple of outstanding red blends from the Gimblett Gravels region: Villa Maria’s Reserve Cabernet Sauvignon Merlot 2020 (80% Cabernet Sauvignon, 20% Merlot) and Esk Valley’s Artisanal Series Malbec Merlot Cabernet Sauvignon 2019.
New Zealand also showed it is a serious Chardonnay producer, with gold medals for Hawke’s Bay producers Tony Bish and Trinity Hill Wines, Central Otago’s Te Kano, Marlborough’s Stoneleigh, and Nelson’s Kono NZ. Trinity Hill Wines’ Gimblett Gravels Chardonnay 2020 also scooped the International Chardonnay Trophy – the first time New Zealand has won this category, which has traditionally been dominated by wines from Chablis.
Although Australia gained the most golds with this grape in the still wines category – 12 – the variety showed it can thrive in a wide range of conditions. There were two gold medals for producers in England (for Chapel Down’s consistently good Kit’s Coty Chardonnay and newcomer Artelium’s Artefact #2 Barrel Aged Chardonnay 2020). Chile’s Viña Errazuriz ‘Aconcagua Costa’ Chardonnay 2019 and Portugal’s Quinta do Gradil Chardonnay 2020 were also awarded the highest medal in the competition.

England cemented its position as one of the world’s best producers of sparkling wines, coming second only to France for gold medals, with vineyards in Sussex, Kent and Oxfordshire all scoring 95 points or more.
Kent, in the far southeast, led the way with 30 medals, two of which were gold and the county also took home the Vintage English Sparkling Trophy for the Gusbourne Exclusive Release 2018. Other wins came for Oxfordshire’s Wyfold Vineyard Rose 2017, which was the only English sparkling rosé to gain a gold, as well as Sussex newcomer Highweald’s Brut Reserve NV, which received the coveted English Sparkling Trophy and the Non-Vintage English Sparkling Trophy too.
“Blending wine across several sites (in Sussex) enables us to create the very finest expressions of the renowned High Weald landscape,” states the company, which started in 2016, planting 120,000 vines across 27ha, and has since acquired the Lake Street vineyard previously owned by Fox & Fox.
As well as the golds for the two Chardonnay varietals mentioned above, there was also a gold medal for a still red wine (Lyme Bay Winery’s Pinot Noir 2020), prompting Oz Clarke, IWC co-chair and author of ‘English Wine’, to comment: “English sparkling wines have been very highly regarded for some time, but what we see now is that they have paved the way for still wines that excel too.”

Australia was awarded an impressive 54 gold medals in this year’s competition, coming second only to France. South Australian producer Pinnacle Drinks won the International Grenache Trophy for its The Ethereal One Fleurieu Grenache 2020 – the first time in IWC history that an Australian wine has won this accolade.
Meanwhile, Tasmania burnished its reputation as one of the nation’s leading wine-producing regions with the Australian Sparkling Trophy once again awarded to the House of Arras, for its EJ Carr Late Disgorged 2006. The region has now triumphed in this category for every one of the last ten years. The Australian White Trophy also went to a Tasmanian producer, with the Tolpuddle Vineyard Chardonnay 2020 claiming both the Australian and Tasmanian Chardonnay Trophies.
IWC co-chair Jamie Goode (pictued below with the other co-chairs) said: “Globally, Grenache is one of the most widely planted red grape varieties but it has not always been popular in Australia. In recent years, it has experienced a resurgence thanks to winemakers switching their focus towards lighter styles which are becoming increasingly sought-after worldwide. It is great to see Australia take the trophy for the first time this year.”

The results of this year’s Challenge displayed an ever-increasing diversity of styles. The orange wine category was a particular highlight with four wines winning gold medals, double last year’s tally. All four were from Georgia:

With the 2019 vintage also winning the Khikhvi Trophy and Georgian White Trophy, Teliani Valley’s winemaker Mikheil Khmelidze is showing the true potential of this almost forgotten Georgian white grape variety.
Meanwhile, Corporation Kindzmarauli showed another side of the variety – its potential as a great white wine, with its Khikhvi 2020 also collecting a gold.
JSC Tbilvino also proved that Georgia can make outstanding white wines, gaining a gold with its Kisi Special Reserve 2021.

Other hidden gems uncovered by IWC 2022 include these gold-medal winners:

One of the biggest surprises of the competition, however, was India gaining its first gold medal… with a sparkling rosé. Sula Vineyards’ Sula Brut Tropicale Cremant De Nashik NV is a Charmat-method blend of 85% Chenin Blanc, 10% Syrah and 5% Riesling. This version, with more Chenin than usual, will be released in August.
The highest medal previously won by India was a silver in 2015.
Pictured below is the Sula winery in India.

If we look at this year’s silver medals, we can see some potential star regions of the future: Brazil, China, Kazakhstan, Mexico, Moldova, Peru, and Wales.
Of the silver medal winners, the three biggest surprises were:

Co-chair Oz Clarke (below) commented: “It is always fantastic to see award-winners from countries with little to no previous experience of success in the Challenge. As well as the notable gold medal for India, we also saw medal winners from Kazakhstan, Wales, Sweden and Switzerland, countries that consumers might not necessarily associate with winemaking. An International Wine Challenge sticker serves as a mark of quality, and gives consumers the confidence to try wines from different countries and in different styles.” 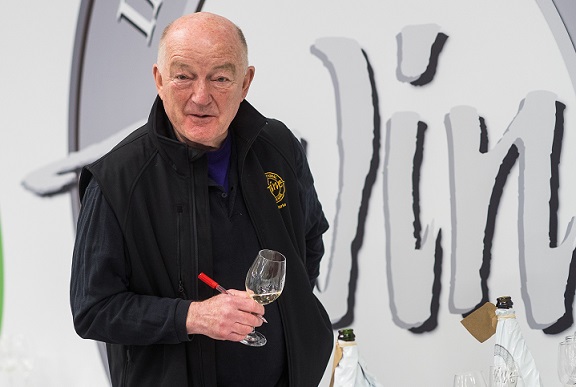 What I’ve learned from the best winemakers at IWC 2022