IWC 2022: The champion wines and winemakers

Sweet Winemaker of the Year, Hans Tschida from Austria, has now won this award eight times since 2010

Wine producers, distributors and merchants gathered in London for the annual IWC Awards, naming this year’s champion wines and winemakers.
The International Wine Challenge, the world’s most influential, impartial and rigorously judged wine competition, also released details of the 40 highest scoring wines in its 2022 competition.
Following a series of rigorous blind tastings, winners from 16 countries were named the best wines in the world, as judged by a panel of global wine experts. Of these 40 exceptional wines, five were awarded the ultimate accolade last night – of Champion Wine, a title reserved for wines that are deemed the absolute best-in-class in the categories of red, white, sparkling, sweet and fortified. 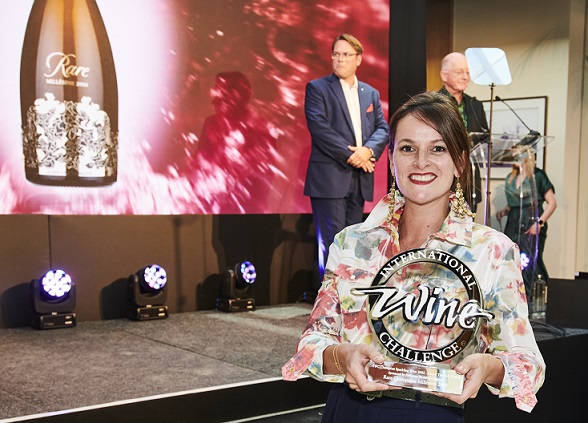 France, the country achieving the most medals overall in the competition, backed that up with two coveted Champion trophies. Northern Rhône producer Maison Delas Frères beat wines from more than 50 countries to secure the Champion Red Trophy for its Les Bessards 2019, which was also awarded the International Syrah Trophy.
The Champion Sparkling Trophy went to Rare Champagne (above) for its Rare Millésime 2008, while Charles Heidsieck’s chef de cave, Cyril Brun (below), was named IWC Sparkling Winemaker of the Year again, having won this title in 2019. 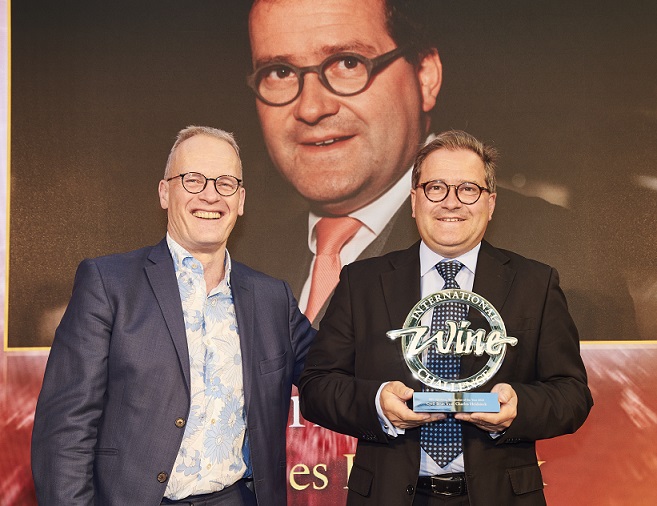 French winemakers were also recognised for their expertise in still wine production. Vincent Bartement from La Chablisienne was named IWC White Winemaker of the Year and Christophe Briotet (below) from Edouard Delaunay won IWC Red Winemaker of the Year (after winning the title for white wines last year). 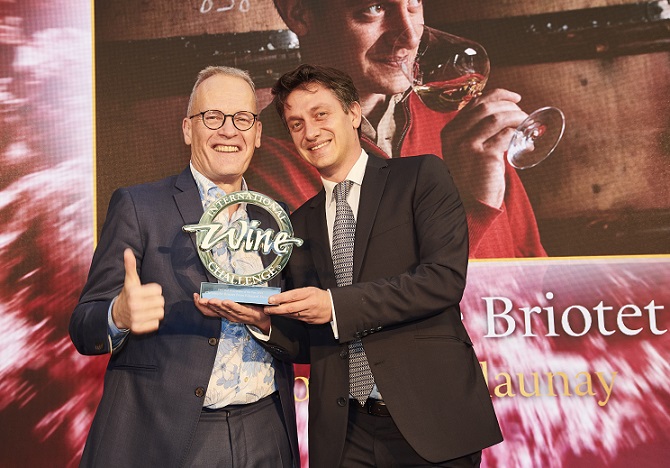 Spain enhanced its credentials as a producer of world-class fortified wines with Bodegas Tradición winning the Champion Fortified Trophy with its Oloroso Tradición VORS, which judges described as having “an almost eternal finish”. Spain also took home the Vermouth Trophy for the Cabecita Loca Vermouth as well as a further three trophies, making it one of the best performing countries in this year’s challenge. Galician producer Bodegas Altos de Torona was awarded the Spanish White Trophy for its Albariño 2021, the Spanish Red Trophy went to Legaris for its Alcubilla De Avellaneda 2018 and Bodegas Villa Conchi took home the Cava Trophy for its Extra Brut Imperial Reserva 2018. 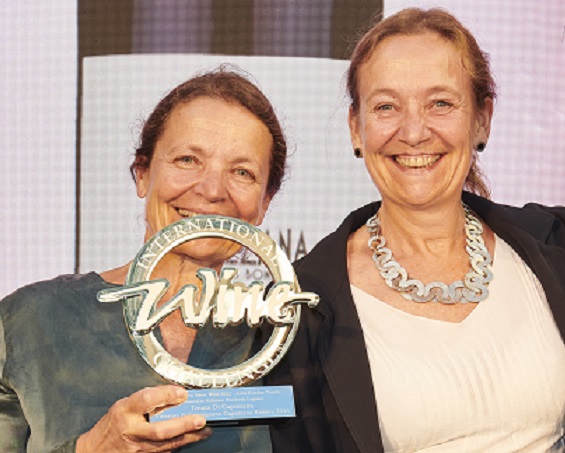 For the second year in a row, Tuscany producer Tenuta Di Capezzana (above) was awarded the Champion Sweet Wine Trophy for its Vinsanto di Carmignano Capezzana Riserva 2014. Meanwhile, Sardinian producer Antonella Corda impressed judges with the “lovely savoury edge” of its Cannonau Di Sardegna 2020, earning it the Italian Red Trophy this year. Further north in the Veneto, Col Vetoraz Spumanti was awarded the Prosecco Trophy for its Valdobbiadene Superiore Di Cartizze 2021.


For only the second time, the Champion White Trophy went to a New Zealand producer, Trinity Hill Wines, for its Gimblett Gravels Chardonnay 2020 (above). The judges were impressed by its “expressive yet nuanced nose” while its environmental credentials were recognised with the IWC Sustainable Trophy.
New Zealand was one of the top-performing countries in this year’s challenge, with a total of five wines in the top 40. Giesen Group had two wines in the top 40 with its Single Vineyard Clayvin Syrah 2019 receiving the IWC Organic Trophy and The Brothers Late Harvest Sauvignon Blanc 2017 claiming the New Zealand Sweet Trophy. Fellow Marlborough producer Yealands Estate Wines secured the International Sauvignon Blanc Trophy with its Single Block S1 Sauvignon Blanc 2021.


Australia, which came second for gold medals in this year’s competition, has an impressive four wines in the top 40 list. For the first time ever, an Australian producer, Pinnacle Drinks, won the International Grenache Trophy for its The Ethereal One Fleurieu Grenache 2020 (above), which the judges described as “soft and juicy yet elegant”.
Tasmania cemented its reputation as one of the county’s leading wine producing regions with House of Arras winning the Australian Sparkling Trophy for its EJ Carr Late Disgorged 2006 and the Australian White Trophy going to Tolpuddle Vineyard for its Chardonnay 2020.
South Africa reclaimed the IWC Fairtrade Award for the first time since 2018 with the Spar Reserve Chenin Blanc Fairtrade 2021 from Breede River Valley producer Uniwines. South African winemakers saw wide success in this year’s awards with the Whitehall Chardonnay 2020 from Neil Ellis Wines winning the South African White Trophy and Bouchard Finlayson scooping the South African Red Trophy for its Tete de Cuvee Pinot Noir 2020. 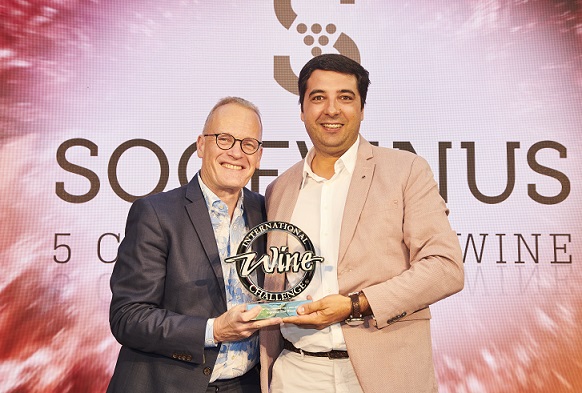 Some of the smaller wine-producing countries also shone. The Sweet Winemaker of the Year, Hans Tschida from Austria (main photo), has now won this award eight times since 2010.
And one of the most prestigious awards, the one that recognises five years of consistent excellence in the International Wine Challenge, went to Portugal’s Sogevinus Fine Wines (above). In that period, the producer of Ports and Douro still wines has been awarded three trophies, 24 gold medals, 36 silvers and 22 bronzes.
But there was a new winner of the Fortified Winemaker of the Year title. This year it went to Luís Sottomayor (below), head of winemaking at Sandeman Port Wines. 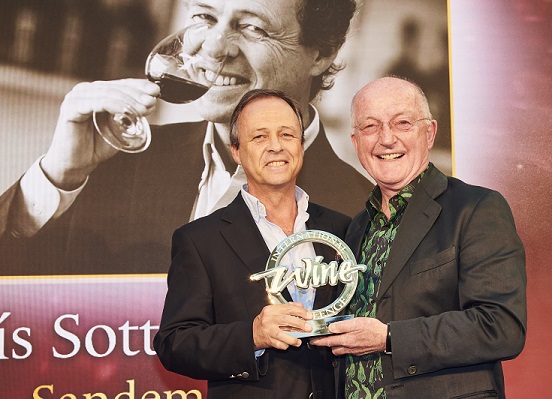 Co-chair Peter McCombie MW commented: “The International Wine Challenge judging panel includes experts from all around the world and each trophy-winning wine is tasted by at least three panels, meaning that each wine is judged as fairly as possible and entirely on its own merits. This year’s top 40 features many familiar names but it is great to see wines from lesser-known regions standing up on the global stage too.”


Winemakers of the Year

The newcomer on a High

What are wine producers doing in one of the wine regions most vulnerable to climate change?

The world of packaging is evolving, innovating and adapting to societal demand for more sustainable products. Canopy looks at the options for wine producers…

Cover crops’ role in mitigating the effects of climate change

“A shift from bare earth to cover crops in the under-vine region has the potential to contain carbon in vineyard soils,” says new research…

The benefits of screening wastewater